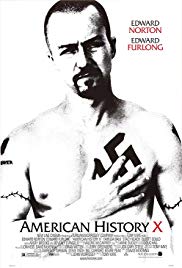 Even more relevant today than it was when it was released, David Ames watched American History X...

Every once in a while a piece of art will emerge that will not only shatter you emotionally, but also shatter your outlook on the world. For myself these are works such as Cormac McCarthy’s The Road, Christopher Nolan’s Inception, Jeannette Walls’ The Glass Castle, George Orwell’s 1984, Hayao Miyazaki’s Princess Mononoke, and John Adjvide Lindquist’s Let the Right One In. These works challenged my perception of the world in which I live and they helped me to establish a new understanding of myself. When I was 14, I was presented with another powerful work of art; one that I feel should be seen by everyone. It is not an easy watch. There are incredibly uncomfortable situations presented and as a viewer, we are forced to interact with those political, social, and emotional struggles. The movie in question deals with the breakdown of race relations and especially racism as it is handed down through families. Today, we are talking about the modern masterpiece that is Tony Kaye’s American History X.

American History X follows the development and eventual rehabilitation of white supremacist Derek Vinyard, played masterfully by Edward Norton, in what I feel is a career defining performance. This film is fluid in its relationship with time, jumping back and forth through flashbacks experienced by Danny Vinyard (Edward Furlong) as he deals with the return of his older brother after a prison stay. Years before, Derek, who at this point is an avowed white supremacist and part of a neo-Nazi gang, had made enemies among the local African American street gangs by beating them in a pick-up basketball game and claiming the park for the white kids. Later that evening, a few of the rival gang appeared at Derek’s home and attempted to break into his vehicle. Derek emerges from the house, shoots some and eventually curb stomps another of the robbers, a scene that is forever ingrained in my memory and one of the harder to watch events.

As he makes his way through prison, we see Derek learn to understand that he is the minority and we see him embrace the need to join a gang, the Aryan brotherhood, in order to stay safe. He is assigned laundry detail with a black inmate and although he refuses to talk, eventually Derek begins to see the error of his ways. The repercussions of this are rough as he is targeted both by other gangs and his own. Upon his release, he learns that Danny is involved in the lifestyle and that he, Derek, has been placed upon a pedestal as an almost god-like figure by his old gang, which has only gotten stronger under the control of Cameron Alexander (Stacy Keach), the leader of the neo-Nazis.

As the film is told out of order, we are given insight into what led Derek to make the decisions he has. We see his father, a firefighter with some race issues of his own, was murdered by a gang of African American drug dealers when he was called to a fire at a drug den. This is the catalyst that leads Derek to seek out acceptance from Cameron’s group. We see Derek and the gang attack minorities at any chance, including an incredibly difficult scene involving a grocery store, which was all videotaped by Danny at a young age. 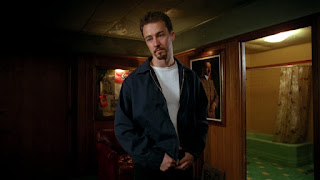 This is all that I want to give away about the plot. Suffice it to say, this film is something that everyone needs to see, at least once, especially considering the issues with race across the world, not just in the US. The film is brutal and unflinching and causes you to examine your own place in the world and just how you speak, both with rhetoric and action. It is one of the most poignant films I have ever witnessed, and although it is hard watch, I feel like it is very important

Performances in the film are stellar. Stacy Keach is conniving and seedy as Cameron Alexander. Other notable actors such as Ethan Suplee and Fairuza Balk play other neo-Nazis and close friends to Derek. The vitriol and hate they spew is very convincing and adds a level of menace that you don’t get initially from their first espousing of love for Norton’s character. Avery Brooks is wonderful as Dr. Bob Sweeney, the school principal and eventual mentor to Derek, who looks past the angry and confused kid and sees the true potential. He is at once sympathetic and understanding as he is stern and intimidating.

Derek and Danny’s father, played by William Russ, is subtle and nuanced, and we see him espouse low-level racism in a way that feels sadly familiar to a lot of people who would have conversations about similar things with their grandparents. While Russ isn’t in the film much, it is his interactions with Derek that really set the stage for where he ends up, and therein lies the message: it starts at home and the seeds we sow will grow into whatever we are pushing as an ideology. It asks us to examine not only how we feel but also how we deal with those issues and what can happen if we aren’t mindful. It was very hard for me to see him in this role as I could only see him as the father from Boy Meets World, but he is perfect in his performance. Last of the side characters of importance is Elliot Gould’s Murray, a Jewish man who dates Derek’s mother. HE is there to show that even innocent bystanders are not immune to Derek’s rage. His main scene shows just how far and how fast Derek had swung to extremism.

Edward Furlong plays the perfectly executed Danny with a chip on his shoulder and an apathy toward the dangers he may feel. Furlong feels like a much older, more racist version of his portrayal of John Conner in Terminator 2. He is so good at playing the cocky young kid, but he really does well in pulling the emotion from certain scenes in which his character’s closely-held beliefs are challenged. He has to deal with his hero changing completely, eventually resulting in an incredibly poignant scene where he and his brother together take down a Nazi flag hanging in Danny’s room.

Lastly, this film is a tour de force for Edward Norton. He plays Derek with such vigor that you feel every move and line and action is natural. When he is young and impressionable, we are privy to watching him slowly fall in line with his dad’s ideology. When he has fully bought into the destructive lifestyle, he exudes hate but also intelligence. He becomes the making of a skinhead and we are given a front row seat to watch him revel in the hatred he feels. At the end, when we see him come full-circle and really examine what brought him to his current state, he is remorseful and thoughtful. Norton showcases his full range in this film and in my opinion, this is a much better performance than even his incredible turns in Fight Club, The 25th Hour, Primal Fear, and Rounders. If I had to pick one movie to show people how well Norton could handle a role, it would easily be American History X.

As a parting note, understand that this film is not a fun viewing experience—it is a NECESSARY one. Whether you fall hard left, hard right, or somewhere (like most of us) in the middle, this film provides something to learn about the way we interact with one another, how much we are influenced in our lives by those who are older and “wiser,” and how responsible we inevitably are for our own actions. This is a film that everyone should see at least once in their lives.