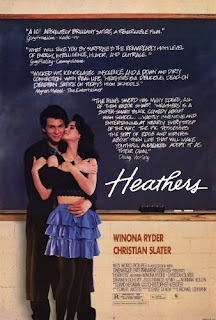 A reminder of Ren Zelen's thoughts from last year on Heathers...

To mark the 30th anniversary, a 4K restoration of Michael Lehmann's 1988 hit Heathers was re-released by Arrow Films, in cinemas and also on digital and on-demand. Popular culture is currently swamped with remakes, reboots, updates and adaptations, so unsurprisingly, Heathers is also being remade as a musical, and in the US, as an anthology TV series.

The TV show promises something of the subversive spirit that defined the 1988 movie, but also updates its version of the high-school hierarchy. The 1980s types have been replaced by a diverse group of teen villains, while the adults agonize over ‘politically correct’ descriptions they use to self-identify.

It’s not even been shown yet, but of course it’s already being criticised. The wildly ‘woke’ are getting het up about the TV show trailer which contains jokes about gender, sexual orientation, ethnicity, size and mental health. Also, in 2018, it’s apparently no longer acceptable to root for heroine Veronica Sawyer as a woman who doesn’t fit in and embraces her imperfections, moral ambivalence and individual quirks. Instead, we seem to feel safer rooting for a child of the status quo who prefers to eliminate her less conventional nemeses.

As a British kid who had little interest in American High School movies, I was shown the original 1988 film Heathers by an American friend and was much surprised and amused by the sly subversiveness of its pitch-black satire. It offered the conventional 'Mean Girls' social dynamics, but offset that with extremes of murder and suicide.

Made a decade before the tragic shootings at Columbine high school, Heathers is a film that appears more controversial now than it was at the time that it was made. Few predicted the dark path America's gun-love has taken since the 1980s, when John Hughes teen comedy-dramas ruled and Lehmann could make a film that mercilessly satirised the media fetish with teen murder and suicide. In Heathers, the hair and clothes may have dated, but the satire seems darker and bites harder than ever before. 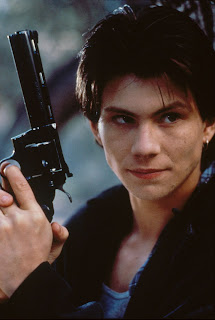 The original Heathers is not a narrative which sets out to deal definitively in right and wrong, (a quality of greyness which would seem to confuse today's filmgoers). At its core it's a story about the moral confusion and ambiguity of our developing teen years, and particularly about the pitfalls of thinking in black and white - in absolutes and extremes. In the world of Heathers, Veronica mordantly observes: “My teenage angst bullshit has a body count.”

In the original film Veronica (Winona Ryder), isn’t so much a heroine as a lens through which we recognise varying shades of right and wrong. Despite being an unwitting accessory to the killing of some of her worst classmates, by the end of the film she’s considered enlightened enough to conclude that her boyfriend, J.D (Christian Slater) is too far gone to be redeemed.

Heathers is certainly very blackly funny, but it’s also a serious tale about how everybody, to a certain extent, is capable of doing very bad things. Really, the question is whether a person can stand up to someone who they can see is dangerously out of control.

Heathers also serves as an acerbic riposte to the romanticised notion of teen suicide, such as the one put forward in films like Dead Poets Society, where Robert Sean Leonard plays a character misunderstood by his parents (but beloved by everyone else) who chooses to end his life with his father’s gun. Following his suicide everyone, including his teacher played by Robin Williams, mourns and weeps for the dear, gentle, gifted soul that was too good for this world. Which teen wouldn’t want to have such adulation?

In Heathers Veronica points out the fallacy of such notions – “Suicide gave Heather depth, Kurt a soul, Ram a brain…” clearly traits none of the above characters ever displayed in life. The media love the tragic image of those too sensitive to deal with the world. Heathers on the other hand, sets out to thoroughly skewer the artificiality of this perception.

The film is named after the female characters who are engaged in a constant cruel exercise of their power and, although ostensibly a group of ‘friends’, are generally vile to all. Actual friendship is something they have eschewed in their ambition to rise into the upper echelons of their social hierarchy. One might level an accusation of misogyny at the writer Waters and director Lehman, but this would be taking a far too simplistic view of what is actually going on – general misanthropy might be a more accurate assessment.

Interestingly, when interviewed, screenwriter Daniel Waters asserted in relation to Westerburg High’s hierarchy: “The high school power centre is female... Girls negotiate high school through strategy, manipulation and compromise…understanding that like a game of chess, sometimes you must sacrifice a pawn to get a king.” 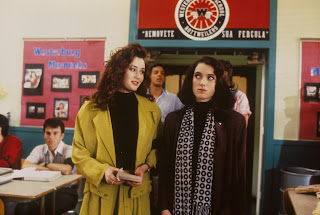 If we accept the claim that the high school is a microcosm of society at large, then these girls are merely imitating the behaviour of adult men that strive for power in the commercial and business world. An indication that this is the case comes when lead Heather (Kim Walker) is challenged with dissent - she pointedly declares, ‘Why are you pulling my dick?” an overtly masculine retort when an alpha-male is reasserting his status. However, in the more adult world of the college party, it becomes evident that her metaphorical ‘dick’ is no longer a source of power, as she is cowed into performing a sex act that she finds demeaning and after which she clearly feels degraded.

The male characters are simpler creatures - they dominate by showing aggression. Dumb jocks Kurt and Ram (Lance Fenton and Patrick Labyorteaux) are bullying and crass, but they don’t really call the shots. J.D is smarter, subtler and more foxy than they are, but ultimately just as aggressive. His only attempt at manipulation is heavy handed – blackmailing Heather Duke (Shannen Doherty) into distributing his ‘petition’.

We are given a cursory explanation for J.D's ultimate psychosis – he has a distinctly odd, role-reversal game with his father, who we understand is somehow indirectly responsible for the death of J.D's mother. J.D has also been moved around from town to town so often he has clearly never expected to achieve any real attachment to anything or anyone. What is telling though, is the overriding trait of the psychopath - his feeling of superiority to those around him.

What sets Heathers apart from less intelligent teenage movies is that it has a particular point of view toward its subject matter. It is shot in candy colours and set in an environment in which silly sight gags are allowed to coexist with a bleak, macabre and bitingly satirical tone. I imagine the film can still shock adults with its cold-blooded treatment of death among the young.

Heathers is not an easy film to classify, the best ones never are - is it a 'Bonnie and Clyde'-style teen rom-com, a black comedy about murder or a cynical morality play? What we can be sure of is that it is the kind of movie that would now probably be impossible to make, or at least release, in the post-Columbine world. To a British kid, the 1980s American High School was a relatively unknown territory, but I did recognise that Heathers was a film which had the ability to shock. It still does, now more than ever, and it should again inspire uncomfortable contemplation - two qualities that will always make it hard to dismiss.