Book - The Art and Making of Preacher 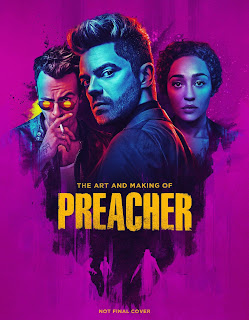 Never mind finding God, with the 4th season of Preacher due to start a one-a-week episode run on Amazon Prime on Monday, Susan Omand found The Art and Making of Preacher by Paul Davies, thanks to Titan Books...

Preacher is coming to an end. And the Amazon Prime TV series really is coming to a proper end as Season 4 will “sew things up nicely,” according to the Preacher panel at the recent San Diego Comic-con, because the makers knew this was going to be the final season just after they had finished filming the 3rd episode of the run, so they wanted to make sure “you understand the journey of each person, and where they end up." So I’m both sad that it’s finishing; it’s been such a brilliant series with strong stories, comic-book perfect directing and a cast so good that I can’t now imagine anyone else in the roles; and happy that it’s getting an official ending because it would be such a shame to leave it hanging.

However, this news made me dig out a book that’s been sitting in my “to be read” pile for a fair while now, as, with the end in sight, it’s time to go back to the beginning.

Titan Books are SO good at their film and TV behind the scenes companion books! They always strike a delicate balance between information and imagery and this time is no different. With a foreword from Series creators Seth Rogen and Evan Goldberg, we go on to chapters about the characters from seasons 1 and 2 (the book was published last summer so seasons 3 and 4 don’t feature.) Paul Davies has covered pretty much everything you’d want to know about the series in an easily readable but still factually dense format. There are cast and crew interviews, costume & make-up information and character bios as well as other chapters on the design and planning of various sets, storyboards of main scenes, production notes, behind the scenes trivia and loads and loads and LOADS of fantastic photos! 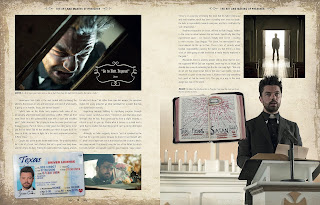 Honestly there’s so much in this book. I love the layout, with its grungy-edged pages and short chapters packing the information in while still keeping it clear and easy to follow. I’ve looked through the book several times in the last couple of weeks and I’m still finding new snippets in it – like shirt collar tabs framing photos, Jesse Custer’s driving licence, Joseph Gilgun’s tattoos and a very surprised looking guineapig!

What you won’t find is much reference to the source material of the comicbooks by Garth Ennis and Steve Dillon and, for me, that’s a good thing. This is a book about the TV series, so fans of the comic will already know how close to the comic’s “look and feel” it is and those fans of the show who haven’t yet read the comics won’t really care.

What it has done, though, is made me want to watch the whole thing from the start again, with the hindsight of all this extra background knowledge. I wonder if I have time to binge-watch all three seasons before Monday?