Book - Football in Sun and Shadow 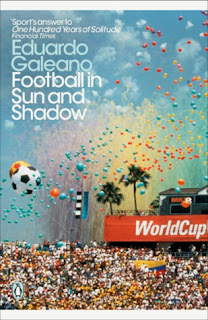 With the start of the "Everything but the English Premier League" football season this weekend, Tony Cross read Football in Sun and Shadow by Eduardo Galeano, translated by Mark Fried…

'Football is a pleasure that hurts'

This unashamedly emotional history of football is a homage to the romance and drama, spectacle and passion of a 'great pagan mass'. Through stories of superstition, heartbreak, tragedy, luck, heroes and villains, those who lived for football and those who died for it, Eduardo Galeano celebrates the glory of a game that - however much the rich and powerful try to control it - still retains its magic.

This is a marvellous book about football, but also more than football. It's about politics, literature, art and life. Any book that (almost) begins 'The history of football is a sad voyage from beauty to duty' is going to be alright by me.

It's also good to read a book written by a South American about football. So it isn't the same stories recycled. The story of the 1966 World Cup is a very different story when told by an Uruguayan than when told by an Englishman is a glaringly obvious example.

There's a refreshingly poetic feel about it too. I love the writing. I like his sense of humour and his sense of the political, which occasionally meet together. For each World Cup he writes a little about what happened in the world, which sometimes throws up the names of writers and novelists that I've not come across before, but who I'd like to read more of. From the moment Cuba falls to Castro each World Cup preview features the same line -

"Well-informed sources in Miami were announcing the imminent fall of Fidel Castro, it was only a matter of hours."

His scathing politics also reach into the world of football itself and those delightful parasites that run it - FIFA - and the corrupting effect of money (and capitalism) on football as just fun.

It's a lovely book. The original edition finished in 1995, but this edition takes us up to 2010. Galeano died in 2012. I wish I'd read it in 1995. I'd have taken a whole different approach to how I wrote about football, even my Brentford match reports.