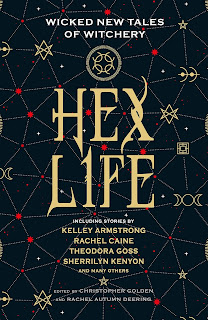 Titan Books announces the publication in October of a myriad of original dark tales in this anthology of witches, fortunetellers and much more. Prepare to fall under the spell of Hex Life...

Hex Life brings you ancient tales of witches, wickedness, evil and cunning. Stories of disruption and subversion by today’s women you should fear. These witches might be monstrous, or they might be heroes, depending on their own definitions. Even the kind hostess with the candy cottage thought of herself as the hero of her own story. After all, a woman’s gotta eat.

Rachel Autumn Deering is a rising star, first coming to prominence as part of the Kickstarter hit, Womanthology. Since then, she has done very well with her self-published horror anthology, In The Dark, and short stories for DC/Vertigo's Magenta series.

Christopher Golden is the New York Times bestselling author of Snowblind, Ararat, Of Saints and Shadows, and many other novels. As editor, his anthologies include Seize the Night, Dark Cities, and The New Dead, among others. Golden has also written screenplays, radio plays, an animated web series, short stories, non-fiction, and video games. He is one-third of the popular pop culture podcast Three Guys with Beards.

Hex Life is published on 1st October and available for pre-order now.