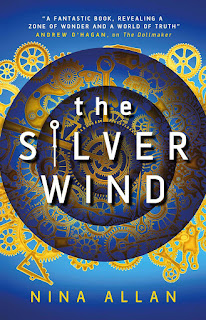 Described as "an intoxicating piece of speculative fiction," Titan Books announce the publication next month of a reworked edition of Nina Allan's The Silver Wind...

“It came to me that time itself had no material presence, that it did not truly exist until it had been taken up by the watch and passed through the mechanism like thread through the eye of a needle. In becoming the owner of the Longines my relationship to time had changed. I felt I had acquired rights over it. The idea had a strange power.”

First published 2011, The Silver Wind was award-winning author Nina Allan’s first full-length work. This brand new edition of the speculative tour de force has been reworked by the author, and also contains a wealth of extra material, including two previously uncollected stories and a new novella, The Hurricane, which explores the early life and apprenticeship of the mysterious watchmaker, Owen Andrews.

A powerful tale of time travel, time lost, time regained and time disrupted. In this remarkable narrative, watches and clocks become time machines, vehicles to explore alternate realities, the unreliability of memory and roads not taken.

Martin and Dora Newland – sometimes siblings, sometimes lovers and sometimes friends, both subject to the tricks and turns of time and fate. Owen Andrews – watchmaker, time traveller, government agent. Their stories interlock and interweave like the perfectly honed cogs of a watch mechanism to reveal an unsettling world of missed opportunities, broken connections and personal losses.

Award-winning author of The Rift and The Dollmaker, Nina Allan once again demonstrates that she is a storyteller at the height of her powers. Nina Allan’s debut novel The Race was shortlisted for the John W. Campbell Memorial Award, the BSFA Award and the Kitschies Red Tentacle.