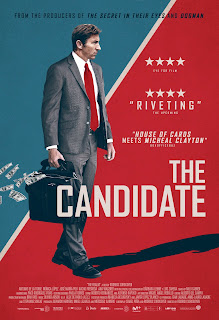 Steve Taylor-Bryant put himself forward to watch The Candidate, out now thanks to Signature Entertainment...

It's 2007 and Manuel López-Vidal (Antonio de la Torre) is a veteran Spanish politician and the right-hand man of Frías (Josep Maria Pou) in Spain’s governing party. Manuel lives a high life, his family having only the best clothes and jewellery, and obviously does well for himself. However, Manuel is a crooked and corrupt man who, for many years, has used his political position, together with his friends, to deviate foreign aid and get his money by means of any illegal way. When Gallardo (David Lorente), one of Manuel’s cohorts, is arrested and accused of fraud and political corruption, Manuel warns all his friends about to keep quiet, hoping that the police forget the case by not finding new evidence. Unfortunately for Manuel it is revealed in the national press that there is a recording of Manuel having personal conversations about his corruption and his fake world of wealth starts to crumble beneath him. His governing party start to close ranks to protect themselves and with the elections looming large Frías also keeps his distance, trying not to become tainted by the allegations of corruption and illegality being thrown about. A new politician in the party Alvarado (Francisco Reyes), an anti-corruption candidate, strikes a deal with Manuel, if Manuel can provide evidence of the deeper corruption within the party and bring down his friends then he will avoid jail. Manuel now has a race against time and an internal battle to wage, does he take responsibility for his corrupt ways or does he try and bring down his entire party?

I thought, because the title was The Candidate, that what I would watch for next couple of hours would be a Spanish language remake of the classic Robert Redford film from the 1970’s where a young candidate comes into politics to clean it up. In a way, there is part of that here in Rodrigo Sorogoyen’s film, in the character of Alvarado, but Sorogoyen, along with Isabel Pena as a co-writer, has taken a look at the corruption in politics from the point of view of those committing the heinous acts rather than from the eyes of the all-conquering hero cleaning up his party, and I did not think that would work. 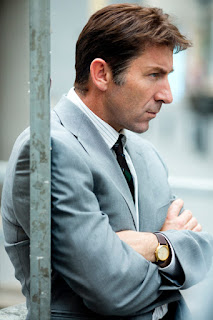 I was very wrong. In this world of 24 hour news media and political commentary you become numb to it, you stop caring about the blatant corruption in front of you, and you care less for those who spout platitudes about being the change but never back up their words. In The Candidate I found myself caring for the corrupt Manuel and genuinely believing that Alvarado will bring the change to Spanish politics. Why does it have to be a film that finally engages me in something political?

There is a tension and menace throughout the film, certain camera angles, Olivier Arson’s unnerving score included that makes you feel physically involved in Manuel’s story and I was tired by the end and felt I had gone through the whole process with them. Antonio de la Torre is a name I have heard before but I had not yet had a chance to see in action. After watching his performance in The Candidate, he is certainly an actor I will seek out again, he wears his world on his face and so the fact that the film is in Spanish with fast moving subtitles won't matter if you are new to that particular style of cinema; if you want to know what is going on just look de la Torre’s face, it is so expressive and definitely a big weapon in his acting arsenal.

The Candidate was a surprising film. It was a lot better made than the trailer had me believe it would be, and it had an emotional effect on me that I thought was long gone. I would definitely recommend you check it out if you are a political film fan.