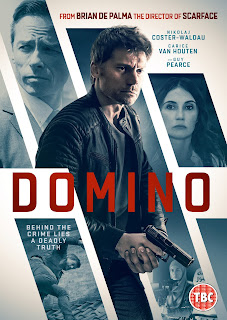 Steve Taylor-Bryant watched Domino, thanks to Signature Entertainment, and wonders why Brian de Palma has fallen out of favour with the money men...

In a world wracked by terror and suspicion, police-officer Christian (Nikolaj Coster- Waldau, Game of Thrones) seeks justice for his partner's murder by ISIS member Imran. On the hunt for the killer, Christian and a fellow cop become caught in a dangerous game of cat and mouse with a duplicitous CIA agent, using Imran as a pawn to trap other ISIS members. Soon, Christian is racing against the clock -- not only seeking revenge but to save his own life.

I’m not sure when it happened, or why, but a long time ago studios and filmgoers seemed to fall out of love with Brian De Palma. Just before I sat to watch his latest, a cop/revenge/spy thriller set in Copenhagen in the near future, I quickly scanned De Palma’s back catalogue to see if I could find out just when the world forgot about this genius filmmaker. This century De Palma has brought us Femme Fatale, The Black Dahlia, Redacted, and the underrated Passion, and when you add this to the likes of Scarface, The Untouchables, Casualties of War, Snake Eyes, The Bonfire of the Vanities, Carlito’s Way, Raising Cain, and the first Mission Impossible film you have to start asking why De Palma is not as heralded as his contemporaries. I can only guess that behind the scenes he is maybe a little enfant terrible in the same way that Terry Gilliam is viewed by major studios and investment houses and that is why his output is infrequent and mainly made and financed in Europe now but, whatever the reason, I feel that the film industry is doing a massive disservice to a true genius of a filmmaker.

That being said, before I even sat to watch Domino, his latest European venture, I heard rumblings of dissatisfaction with his financiers and De Palma throwing a tantrum over which cut of the movie gets released. Perhaps these tantrums by directors over final cut are childlike and annoying, but I’m from the school of thought that has the opinion if you hire a filmmaker to make a film, then you should release his film. Why is there even a conversation over which version of a film will be better? Are you really trying to convince me that a panel of money men and marketing gurus can cut a film better than the original storyteller? Sit down and shut up. It did leave me worried that I would watch a film by De Palma for the first time and see his star begin to wain though. Press play.

Domino is most definitely a Brian De Palma film, of this I am really happy. It is beautifully shot, and the De Palma camera angles and sweeping shots that tell you more story than any dialogue could are all in there. When there is violence, or signs of torture it is realistic without being brutal, and in true De Palma fashion he shoots scenes in such a way you think you have seen more than he actually filmed. All these little trademarks of Brian De Palma’s work will always be welcome by me.

The story, written by Petter Skavlan, is okay, it's not the most original of tales but its certainly not the worst espionage thriller ever committed to paper and, if it was written by an English or American writer, I probably wouldn’t comment too much on it but Skavlan is Norwegian and maybe I have been very spoiled by the gripping and very dark tales coming out of Scandinavia recently, but I felt this was a little flat in comparison. More written for a delicate English-speaking audience rather than true lovers of the gritty and warped stories that normally would come from the pen of a Scandinavian. That being said, the films brisk runtime allows the story to go at a pace that pleases, and you are rarely left with periods of nothingness to get lost or bored in, so swings and roundabouts.

I liked Domino, I finished watching Domino happy in the knowledge I had watched a Brian De Palma film, but whilst I really enjoyed it, I wouldn’t jump Domino into a top five De Palma list. He has been better and maybe it is time that he got brought in from the cold and given a decent crack at another slightly larger budgeted film again.