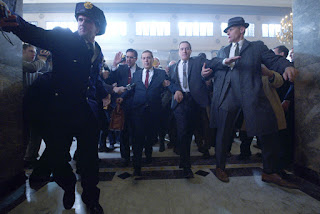 Marking Martin Scorsese's 25th full length feature film as a director and his 9th collaborating with Robert De Niro, watch the trailer for The Irishman...

Robert De Niro, Al Pacino and Joe Pesci star in Martin Scorsese’s The Irishman, an epic saga of organized crime in post-war America told through the eyes of World War II veteran Frank Sheeran, a hustler and hitman who worked alongside some of the most notorious figures of the 20th century. Spanning decades, the film chronicles one of the greatest unsolved mysteries in American history, the disappearance of legendary union boss Jimmy Hoffa, and offers a monumental journey through the hidden corridors of organized crime: its inner workings, rivalries and connections to mainstream politics.

Also starring Anna Paquin, Harvey Keitel, Stephen Graham and Bobby Cannavale amongst a host of other big names, the screenplay, based on the book I Heard You Paint Houses by Charles Brandt, was written by Steven Zaillian, the pen behind such films as Schindler's List, The Girl with the Dragon Tattoo and Gangs of New York.

The Irishman will debut next month as the opener of New York Film Festival before heading to Netflix.