Book - The Girl the Sea Gave Back 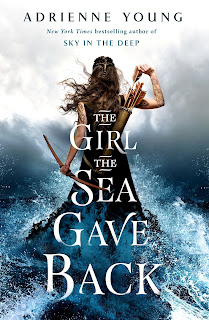 Coming in September, from the author that brought us Sky in the Deep, Adrienne Young, and Titan Books comes the highly anticipated companion novel, The Girl the Sea Gave Back...

But what did these warriors know about fate?

It was the curling, wild vine that choked out the summer crops. It was the wind that bent wayward currents and damned innocent souls to the deep. They hadn’t seen the stretch of it or the way it could shift suddenly, like a flock of startled birds. Fate’s hand was something they said because they didn’t understand it.

That’s what I was for.

Set ten years later in the same vividly imagined world of Sky in the Deep [read an extract from that book here], and featuring an adult Halvard, The Girl the Sea Gave Back promises to be a refreshingly new, yet familiar addition to the captivating series.

For as long as she can remember, Tova has lived among the Svell, the people who found her washed ashore as a child and use her for her gift as a Truthtongue. Her own home and clan are long-faded memories, but the sacred symbols and staves inked over every inch of her skin mark her as one who can cast the rune stones and see into the future. Tova has found a fragile place among those who fear her, but when two clans to the east bury their age-old blood feud and join together as one, her world is dangerously close to collapse.

For the first time in generations, the leaders of the Svell are divided. Should they maintain peace or go to war with the allied clans to protect their newfound power? And when their chieftain looks to Tova to cast the stones, she sets into motion a series of events that will not only change the landscape of the mainland forever but will give her something she believed she could never have again – a home.

Young effortlessly weaves the perspectives of two unforgettable protagonists in the form of Tova and Halvard to divulge this compelling and immersive fantasy adventure about identity, belonging and what true family really means. Fans of Sarah J. Maas, Victoria Aveyard and Kelley Armstrong will revel in the rich, immersive world building and the exploration of a new and exciting kind of magic in a Viking-inspired backdrop.

Adrienne Young is a born and bred Texan turned California girl. She is a foodie with a deep love of history and travel and a shameless addiction to coffee. She lives with her documentary filmmaker husband and their four little wildlings beneath the West Coast sun. Adrienne is the author of the New York Times bestseller Sky in the Deep and the forthcoming The Girl the Sea Gave Back.