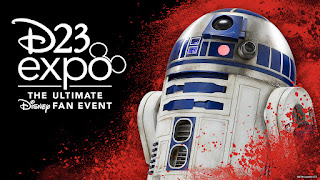 These are the droids you're looking for as Kraig Taylor-Bryant reviews the Star Wars related news that came out of Disney's D23 Expo recently...

Well it’s definitely surprising that I’m even writing this article, this was meant to be an analysis on the Mandalorian, but the amount of Star Wars content that’s been announced recently is just so overwhelming it’s hard not to want to cover it all.

The stage of D23 announced a great many projects for Disney’s streaming service, giving us peeks at some projects, and announcements of others. Some of the projects (like the latest episode 9 “special look”), have definitely left us with questions to be answered. However, before we can go over the unknowns of all the Star Wars projects that we were given new details on, let's go over what we do know. 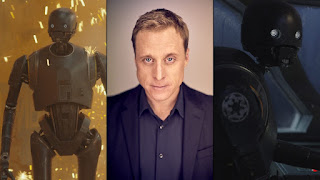 Surprisingly the first project in the Star Wars segment to take centre stage was Rogue One’s Cassian Andor TV series, with an appearance of both Diego Luna and Alan Tudyk. So, even though not much was said specifically about this show, what we do know for sure is that it’s definitely a prequel, which I think most people are thankful for, because I personally think it would be a little far-fetched if somehow Cassian survived a Death Star blast. Another thing that the Cassian Andor segment told us, was that K2S0 is definitely going to be in the show, and I think hearing Alan Tudyk’s personality on stage will do nothing but build anticipation for seeing the fun imperial droid back on screen, when the show is wrapped up filming. Speaking of filming, they did also cover when shooting begins, which will be in 2020, and that they’ll start filming in London. So, announcing this to the world is sure to get fans ready to begin leaking things however they can, but it’s good to hear that the writing for the show is progressing, and we won’t have to wait too long to see it. 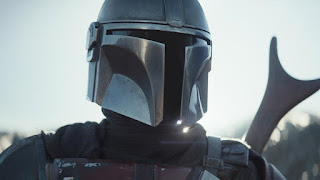 Next on stage, we got to see the show producers for the Mandalorian TV show, Jon Favreau and Dave Filoni. There was a fun story about how they met for the first time, which led to a conversation about how they became inspired for the Mandalorian live action show. One of the things about the show concept that was announced on stage (if you weren’t already aware), was that the show will be set between episodes 6 and 7, and to quote Jon “I pitched to Kathleen Kennedy a story that took place after Return of the Jedi, after the revolution, after everybody’s done celebrating, and then there’s chaos, because there’s no central government”. It definitely sounds like this one will be exciting, though they would later show this trailer...

It reveals a scene when the Mandalorian is fighting people in Stormtrooper armour, which did seem confusing, since Favreau stated that the show is set when the Empire is gone, though I suppose he could have meant that they simply aren’t an Empire in general anymore. I suppose from this we could take a good guess that this isn’t after the Empire is entirely wiped out at the battle of Jakku, but rather when the Empire is still putting up a bit of a fight, as in, during the final year of the remnants of the empire, so it’s good that we have a time frame to work with. Favreau mentions that the show is ready for its release on Disney plus but, even though this wasn’t announced on stage it was reported by multiple sources that Favreau is already writing the second season, so I think it’s clear that Kathleen, Filoni and Favreau have faith in the show’s success, so I think the Mandalorian’s definitely the show to watch out for, when the service is released. 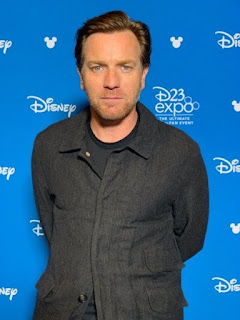 Now the one that people were hoping to hear about, the one that was rumoured for a long time, was finally announced at D23, and I think the wait for an announcement was what made it a much bigger deal when Ewan McGregor made his appearance on stage and announced to the audience that he will be reprising his role as Obi Wan Kenobi in a new original series. Besides this they didn’t say much else, probably for the same reasons they didn’t say much about the Cassian Andor show, in that they’re not ready to, and want to build hype for “The Mandalorian” and “The Rise of Skywalker” with announcements from those projects first. What we do know though is that the show has “all the scripts written” and will also begin filming next year. I think judging by the fact that the new season of the animated show “The Clone Wars” will be released a few months after The Mandalorian on Disney plus, it’s clear that the Star Wars TV shows will be rolling out pretty much two at a time, whilst being cautious of their view ratings of each show, which I don’t think is going to be a problem. 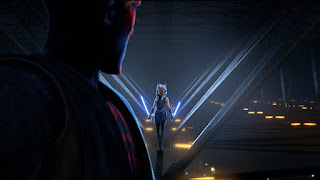 Anyway, speaking of the Clone Wars animated show, if you aren’t aware, The Clone Wars is an animated Star Wars show set between episodes 2 and 3, bridging the gap that is the war between the droid army and the Republic. The show was released back in 2008 but was unfortunately cancelled in 2014 (soon after Disney acquired Lucasfilm), before the show had entirely finished its 6th season, although the 6th season was available through the DVD release titled “lost missions”. Following the disappointment of so many though, the show was announced at Star Wars Celebration with a trailer for a 7th season on Disney Plus, and Kathleen briefly goes over the return of the show at D23.

However, on stage, all we got to see regarding the show’s return was an enticing image of Anakin’s apprentice Ashoka, facing off against Darth Maul. This will definitely be one of the releases to watch out for not too long after the streaming service’s release. 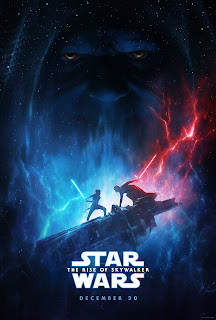 Of course, we didn’t have to wait too long from the Disney plus panel to get news on Episode 9, with the “special peek” video that came a couple of days after the panel. So, what did we learn about this film? Well during the interviews that followed the panel, John Boyega (Finn), had something very interesting to say about his own character, mentioning that in this next instalment we get to learn more about Finn, and where he came from. Which I think will be very exciting, and somewhat unlike JJ Abrams, considering what little we learned about these new characters across Star Wars The Force Awakens, so it should be a nice surprise. What we also heard in these interviews, was that there will be more lightsaber battles in this instalment, which will definitely be an exciting change to Episode 8, which, whilst we did learn a lot about these new characters, it did feel somewhat lacking in lightsaber duels, so this will definitely be another thing to get excited for. One other thing that I think held my attention during interviews, was that we will also learn more about Poe, seeing as one of the new characters of Episode 9, “Zorri” will have some kind of pre existing relationship with Poe, which is probably going to be their “in” for how we learn about Poe’s past.

So, what exactly are the unknowns amongst all these announcements? What are the things that really left us raising eyebrows and dropping jaws? Well the Rise of Skywalker “Sneak Peek” definitely did that job well, with reveals such as (*spoiler*) the appearance of Rey with her dark hood and red lightsaber, so of course the real question here is, is JJ Abrams misleading us? Will Rey turn to the dark side? We’ll likely have to wait until December for this answer unfortunately. One other big reveal during this “sneak peek” was the reveal of a fleet of Imperial Star Destroyers, which obviously raises questions like, will we see a big battle between three factions? Or are these ships reinforcing the Resistance or First Order? Either way, this reveal ought to make the space battles interesting. When it comes down to all the other announcements at D23 I think the big questions revolve around questions about the plot of certain shows, like with the Cassian Andor show and the Obi Wan Kenobi show/project. And with the announcement of only a few countries receiving Disney Plus on release, how long will the UK and other countries, have to wait for a worldwide release? I doubt we can rely on the force for this one, only the folks at Disney.