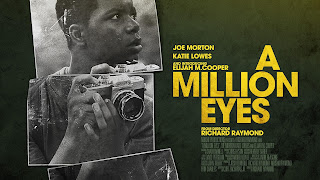 One of the stand out favourites in the race at this years Oscars for Best Live Action Short Film, and available to watch next week on a Facebook Live watch event, a reminder of Susan Omand's thoughts on A Million Eyes from Raindance Film Festival...

This short film caught my attention because I remembered enjoying the work of the director, Richard Raymond, when I reviewed his short film Souls of Totality (read that review here) at last year’s film festivals and I was interested to see what he would do with a completely different subject. I was not disappointed.

A Million Eyes tells the story of Leroy (Elijah M Cooper), who deals with the emotions of a hard life compounded by his mother’s (Katie Lowes) alcoholism by channelling them into creative photography, after being set on that path by two separate people, Pyro (Shareef Salahuddin), his cell mate in juvenile detention where he got sent after being caught vandalising books in the book store, and Fern (Joe Morton), a neighbour who takes an interest and teaches Leroy the “magic” of developing film in a dark room and encourages him to “find his own truth” with the camera.

A Million Eyes is under 25 minutes long and yet it felt like I’d watched a full-length feature film because the characters were so engaging and the story utterly immersive. Raymond also managed to weave a beautiful undercurrent of warmth and humanity into what could otherwise have been a fairly bleak subject. The bonds between Leroy and each of the other three main characters were highly credible because the acting, especially from young Elijah Cooper, was pitch perfect and the plot was very well constructed with plausible dialogue from a solid script by Curt Zacharias Jr.

What I especially loved about the film was that whole backstories were built for the characters involved, not using dialogue or exposition, but just by single camera shots, like focusing in on a framed photo of a young man in military uniform beside a triangle of folded flag, which gave all the reason I needed to explain the mother’s addiction and her need to forget. Or the wall of photographs cut from magazines in Leroy’s room, cut from books like those he got sent to juvie for, telling of his desire for escape from his current life. This attention to detail really helped to round out the story. As with Raymond’s previous short, Souls of Totality, though, it was the cinematography in general that was a real highlight of A Million Eyes for me, it really is beautifully shot and the use of light and colour is stunning, so it was no surprise to find that the same person, Jarin Blaschke, was behind the camera for both - definitely a name to look out for in future.

All in all then, A Million Eyes is a beautiful little film which develops into a lot more than a sum of its excellent parts and I encourage you to seek it out at the Facebook live event.