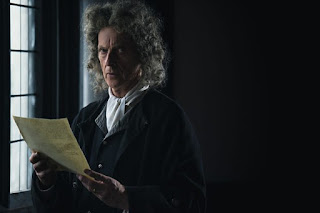 1684. John Martin is on trial for his life. Facing him, the infamous ‘hanging judge’, George Jeffreys. But this is not a cut and dried murder case. Because the innocent young girl Martin is accused of killing has been seen after her death...

Peter Capaldi will play Dolben, in a cast which also includes Wilf Scolding (Game Of Thrones) as John Martin, Simon Williams (The Archers) as Stanton, Sara Crowe (Four Weddings and a Funeral) as Sarah, James Holmes (Miranda) as Snell, Fisayo Akinade (A Very English Scandal) as William, and Elliot Levey (Murder On The Orient Express) as Judge George Jeffreys.

The standalone 30-minute drama is adapted and directed by Mark Gatiss (Sherlock, The League Of Gentlemen, Doctor Who) who said, “After the delightful success of last year’s The Dead Room, it’s a fantastic privilege to continue the tradition of the Christmas Ghost story on BBC Four - and what better than one of my favourite stories by the master of them all, M.R. James?"

Cassian Harrison, Channel Editor of BBC Four, added "I’m delighted to welcome another of Mark Gatiss’ ghostly escapades to BBC Four after the success of last year’s The Dead Room. With a stellar cast and a plot to send a shiver down the most resolute of spines, this is a guaranteed treat for the winter nights.”

Martin's Close follows the tradition of ghost stories for Christmas on the BBC, most recently continued by Mark Gatiss with Crooked House (2008), The Tractate Middoth (2013) and last year's The Dead Room, starring Simon Callow. The Dead Room was watched by almost one million viewers over the festive period, placing it within BBC Four's top ten shows of last year.

Martin's Close is made for BBC Four by Can Do Productions with Adorable Media. It is adapted and directed by Mark Gatiss, and produced by Isibeal Ballance. Ben Irving is executive producer for the BBC.