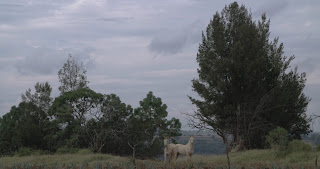 Tony Cross got back in the saddle and watched Caballerango at Open City Documentary Festival recently...

There is something elegiac about Caballerango. Directed by Juan Pablo González it starts off looking as if it is going to be the story of Nando, a horse wrangler living in a rural Mexican village, Milpillas. Nando died, ostensibly taking his own life, but there is something about the circumstances which makes it possible that there was more to it than that.

We hear from Nando’s father, who ponders the harshness of his last words with his dead son. But what we get is the camera acting as much as an ear as an eye. The camera hardly moves throughout the film. Sometimes it just sits and looks at the landscape, as if we have stepped inside a painting. Then someone will talk. Sometimes for a long time. Sometimes for a short time. And gradually we learn that this part of Mexico seems to have a suicide epidemic amongst the young people of the region. We hear of death after death. Some sound horrific. There’s a problem here, but we don’t hear what it is.

However, it is no coincidence – surely – that the problems of the area are linked to the signing of NAFTA and the decline of corn as a profitable crop. In his Q&A afterwards Juan Pablo González pointed out that there was a clash between the modern world – Nando’s sister running a nail bar or the industrialisation of agricultural – and the regions conservative Catholic culture. This clash must surely contribute to what is happening. Especially as the smart phones and internet open a whole potential world to dream about escaping to.

There was something about it that made me feel the kind of loss I felt when reading the poetry of Wilfred Owen or hearing a song by The Unthanks. It’s not depressing but it does feel like you are looking through the camera at a lost world.

It reminded me of something I ill-remember from 2000AD the comic as ‘Future Shock’. The fate of these people isn’t madness, but it does seem to feel like there’s a lack of hope. Especially for the young. It also reminded me of a documentary I reviewed a short while back, from India called ‘Absence’. Not just because of the long silences and picturesque landscapes but also because the stories aren’t told directly. We never see Nando. We just hear about him in the lead up to his death and the discovery of his body.

It does look beautiful though and Jim Hickcox’s Cinematography is stunning. There are some landscape shots that might not look amiss on an art gallery wall, although Juan Pablo González said that he deliberately avoided the more cliched landscapes shots. The region grows a lot of agave, which is the plant Tequilla is made from and that dominates the landscape. You’d know it if you saw it and González goes out of his way to make sure you don’t see much of it.

The question you find yourself asking is where is the hope? Catholicism is strong in the region, but is that the kind of Christianity that offers the struggle in the here and now as a price worth paying for the joy hereafter? I wanted to find out what – if anything – was keeping these people going.

It’s hard, sitting here in the comfortable-ish position in life I find myself living in to understand what is happening in the rest of the world. What globalisation means to the poorer countries in the world. It helps to understand what drives the movement of people from the south to the north. How this will end who knows, but climate change is certain to impact on the poor more than the rich. How many other regions of the world are suffering in the same way as this one? How many young lives are wasted?

Watch it. It makes a point without being needing to lecture. Indeed, there’s not a lot of words here at all but the story gets told regardless.