Documentary – Movements of a Nearby Mountain 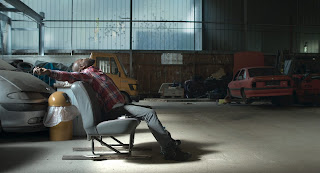 With its UK premiere tomorrow at Open City Documentary Festival, Steve Taylor-Bryant watched the documentary Movements of a Nearby Mountain...

At the base of a mountain in the Austrian Alps, next to the centuries old iron mine of Ezberg, is a workshop. In that workshop, often alone, is native Nigerian Cliff who buys old cars and strips out the parts to sell back in his homeland for a small profit. Set to the backing of Nigerian songs and the myth of the water sprite that brought people the everlasting iron in return for his freedom, you watch Cliff as he removes engines and stacks up tyres. It doesn’t sound much but there was something calm and glorious about watching a lonely soul go about his day and it was refreshing to watch something about the automobile industry that didn’t make me immediately rise with anger. I was, however, left wanting more.

Whilst the film from Sebastian Brameshuber is beautiful to look at and Cliff was endearing, and whilst Movements of a Nearby Mountain was a fantastic snapshot of somebody you'll probably never meet's life, I found myself wanting to get to know Cliff in detail; I found him to be a man at home with his loneliness whilst trying to do something back in his native land but never found out why and how he came to be in Austria to begin with. The film subtitles Cliff, and the odd customer or colleague, but much of the film is very visual which is great as a piece of art but as a documentary where I wanted to learn, it didn’t quite do it for me. I am led to believe that Brameshuber started his journey with Cliff as a short film, and maybe within that film there is the detail I was left craving and maybe it is my failing that I didn’t seek out that film first before graduating to the full length feature, but I am at a documentary festival watching what is put in front of me and so I can only judge purely on that.

Movements of a Nearby Mountain is an enticing film, beautifully shot with contrasts of the industrial against the backdrops of Austrian countryside but, whilst I enjoyed my viewing experience, I can't help but go back to the nagging feeling I have that more could have been done to get under the surface of who this man was. As a visual piece of art, Movements of a Nearby Mountain is as stunning as you’ll see but as a documentary it could have been more.