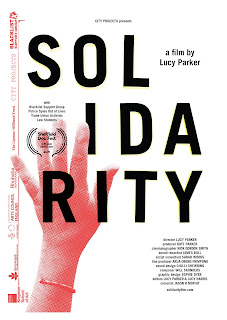 I’m usually a bit sniffy when people talk about conspiracy theories, but Solidarity tells the story of a genuine conspiracy. It involves the blacklisting of ‘difficult’ workers, mainly in the building industry and the infiltration of left-wing organisations by undercover Police Officers. Some of these Police Officers went as far as to have relationships with some of those they were spying on.

The Blacklist, run first by The Economic League and then by The Consulting Organisation, finally came to light as the result of a Data Protection Act investigation. It was funded by selling information on workers to its members, building companies such as McAlpines. The information, which seems to be as much gossip as it is fact, was used to keep ‘troublemakers’ out of work. Parliamentary Committees and other investigations have established that information was supplied to the keepers of the Blacklist by the Police, by Special Branch and by the Security Services.

Most of these people were doing nothing but complaining about working conditions, about health and safety or just being good trade unionists. Nothing they were doing was illegal, just annoying. And yet their lives were made difficult. No one, except a Mr. Kerr who ran The Consulting Organisation has been prosecuted for anything. Mr. Kerr was fined £5,000 for a breach of the Data Protection Act.

As I pointed out in my review of The Crosses, which I also saw as part of the Open City Documentary Festival, these kinds of lists are bloody dangerous. If a society changes and the bastards get control, they’re used to identify people to be eliminated by the state. Now, that hasn’t happened here. It happened in Chile. First, they come for the Trade Unionists.

Solidarity is partly about the story of the Blacklist, the attempts of the Blacklisted to get justice and the ongoing fight against Blacklisting. There’s a lot of questions raised. The Blacklisted have won financial recompense, of a sort, but they wanted a trial and you might argue that the state, in the form of the legal profession, did a good job of avoiding that outcome. They also want a Public Enquiry, which they’ve not had so far. 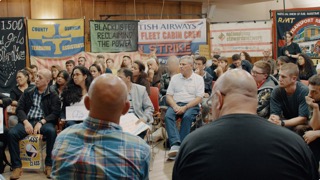 The interesting thing about the film is that everyone is entitled to be raging but they’re mostly calm enough as they tell their stories of financial difficulties and of having to work with dodgy employers because those were the only jobs they could get. We also hear from other workers who are trying to form Unions in industries hostile to their existence, like the new gig economy or domestic workers. What information are their employers gathering about them? How do you know you’re on a blacklist if no one admits there is a blacklist? How is new technology being used to harvest information about what we think and say? And most importantly why does anything we think and say outside our work that isn’t illegal have anything the fuck to do with the people that might – or might not – employ us? Who needs a Stasi when HR can do the work for you?

The other part of the film focuses on the undercover Policing. Partly because it connects to the Blacklist and partly because it is another story of state sanctioned injustice. The Police don’t come out of this film well at all. The list of organisations they were spying on is a long, long one and almost all of them seem to be harmless. Some of them, like those who spied on the families like the Lawrences, seem a disgusting abuse of power. The Police like to spy on people who might make them look bad. And in doing so they forgot to abide by their own rules – if there were any rules.

There is a public enquiry looking into this one you’ll be pleased to know. It started in 2015, despite the best attempts of the Police to avoid it and will finish in 2020 and report in 2023. The gears grind slow in the world of lawyers, but hopefully someone, somewhere will pay a price for their playing at spies. Probably no one with real authority though. Those people get knighthoods and retire to be wheeled out for special state occasions.

Cynicism is a terrible thing, but a film like this well-made though it is can only encourage one to feel cynical. That all those conspiracy theories about the state using all its tools to keep the workers in place are true. And that the people who are supposed to protect us from criminals are perfectly capable of acting like criminals when they feel threatened.

And in our current political climate a film that encourages us to take on these struggles and to ask questions about how we stop these things happening again is important. I think this would make an interesting double-bill with Carlos Vasquez and Teresa Arrendondo Lugon’s The Crosses.

See this and be angry.


After being well received at both Sheffield Doc/Fest and Open City Documentary Festival, the director of Solidarity is touring select venues with the documentary and Q & A Sessions. More dates are to be added to the list below:

All screenings are with Q&A’s with Director, members of Blacklist Support Group, featured activists, politicians, legal professionals or core participants of the Undercover Policing Inquiry