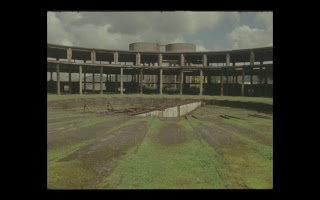 Taking the wraps off a political crime long covered up, Tony Cross watched The Crosses (Las Cruces) at the Open City Documentary Festival...

This is a quiet film about a terrible crime. It won't get shown anywhere but you should watch it because it is a story that needs telling. This is also a film that moves. Not just to sadness, and there’s plenty of that, but to anger. This is quite impressive for a film that is such a quiet, calm presentation of the story. The directors, Carlos Vasquez and Teresa Arrendondo Lugon, don’t use images of the past to tell the story, but focus on local people reading out accounts of that day from interviews with police officers and the countryside. The places where what happened, happened.

What happened was one of the many murders committed in Chile under Pinochet. Nineteen men from the region around Laja were rounded up by the Police at the behest of their employer, CMPC. They were taken into the woods and murdered. Their bodies were lazily buried. So, they had to be dug up and moved. They become some of Chiles’ disappeared.

But then the persistence of the family saw a judge investigate what happened and the film tells us what happened. Its aesthetic is minimalist. Indeed, its focus on landscape not people reminds me of Cabellerango, which I saw earlier in the Open City Documentary Festival. There’s a similar air of grief about it. It also has ties to Solidarity, which is about the blacklisting of Trade Unionists by British building companies. What starts off ‘just’ as blacklisting by an employer can, if the country we live in changes, turn easily into murder. It also reminded me of Patricio Guzmán's ‘Nostalgia for The Light’, which also tells the story of Chiles’ disappeared and their families search for justice.

The camera seems to be taken a long, sympathetic look at where these events took place and prods us to ask why no one has ever been punished for these crimes. The accounts of the Police Officers who committed them are clear, even if they were young, only obeying orders or plied with drink to make what they were doing something they could deal with. Getting local people to read out these accounts, rather than the men themselves, makes it less emotional. There’s no attempt to plead. These men know what they did and have lived with it since.

The final scenes as the camera tours the region looking at all the crosses scattered there is incredibly moving without requiring the making a song and dance about what it is doing. Indeed, this is a resolutely undramatic telling of a terrible story and for me this makes it all the more moving. Just like the attempts of British actors in the thirties and forties to hold back their emotions is sometimes more heart-breaking than an actor throwing their emotions out everywhere.

I would recommend this film, but I suspect its lack of overt drama will make it a hard film to sell. Occasionally though, you want people to see a film that they’ll never see in a cinema. It might come to television in the end. If it does, you should see it. If it doesn’t, then something is wrong somewhere.