Documentary - Under the Radar: The Mike Edmonds Story 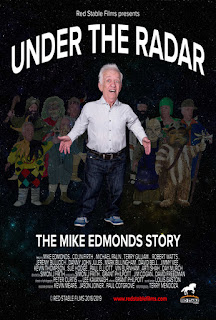 On next week at Raindance Film Festival, Steve Taylor-Bryant discovered there's a lot of love for a "little guy" as he watched Under the Radar: The Mike Edmonds Story...


Prolific, inspirational actor and "little guy" Mike Edmonds is joined by Michael Palin, Colin Firth, Terry Gilliam, Danny John Jules, Mark Billingham and a host of other actors, producers and directors in this feature-length version of a much-loved short. No ordinary film biopic, Under the Radar follows Mike from his mischievous Essex childhood through a 40-year acting career, encompassing scene-stealing roles in Time Bandits, Return of the Jedi, the Harry Potter franchise and a host of other blockbusters, stage plays and iconic TV series. A natural talent and a consummate professional who's willing to sacrifice comfort (and occasionally safety) for the sake of a role, Mike has turned disability (achondroplasia/dwarfism), with all its challenges, into ability. He's also the glue that held a hundred casts together.

Sometimes in the course of a reviewer's life you come across something you have to write words about but you know deep down that nothing you get on paper will do what you’ve just seen any justice at all and Under the Radar: The Mike Edmonds Story is one such film. How do I possibly describe the joy I have just had watching something so wonderful? Well, I’ll try, but honestly you should just take my word for it that you need to watch this film, be transported back to your childhood or wallow in the superlatives thrown around.

From Mike’s early life at school in Essex to playing Jabba the Hutt’s tail, there isn’t a part of Mike’s life that is off limits and, for about an hour and half, there are film and television stars waxing lyrical about an actor they are all in awe of, there are other actors who have physical differences who are only where they are now because of Mike’s trailblazing or support, and there is Terry Gilliam.

It's no secret that Terry Gilliam is my film-making hero and I will spend endless hours watching anything Terry related but normally it is Terry answering questions about himself or his techniques and experiences. In Under the Radar: The Mike Edmonds Story there is a huge period of the film’s runtime devoted to Time Bandits and, to watch Terry Gilliam so happy as he remembers working with Mike, is so pleasing for a fan.

Under the Radar is a glorious, heart-warming look at one of the biggest stars of my childhood.