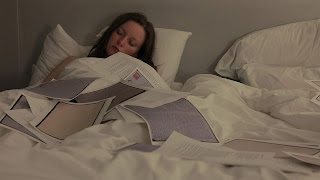 It is possible that this short film – it’s just over an hour long – was made just for me.

It is a semi-autobiographical story of a young women, Audrey, who is researching the correspondence between her great-grandmother, Zofia Bohdanowiczowa, and the Polish poet Jozef Wittlin.

It manages to show us Audrey’s determination and intelligence in the face of both minor bureaucratic prissiness, in the form of the rule-explaining and coffee-denying* librarian. The ‘pencil only’ when writing notes will be familiar to anyone who uses the British Library, but it is mildly amusing. Most people seem to use some sort of tablet or laptop these days but there’s something lovely about the sight of hand written notes. Or there is to me at least. I might be a little weird that way.

There is the also the more annoying barrier of her Aunt, Ania. Ania seems a little snippy about Audrey’s role as Zofia’s literary executor and the clashes between the two – relatively mild though they are – also illustrate Audrey’s refusal to back down.

But this film features scenes of research, of poetry and of post-research discussions in a bar over beer. What more do you want from a film? In the bar scenes Audrey is talking to someone. This someone turns out to be the man who translated the letters from Polish into English so that Audrey could read them. His role grows a little as the film goes on. And then becomes something else. And then is gone.

As I said this could have been made for me. The talk of what the letters mean both as objects and as ‘content’ and whether one is more important than the other is fascinating. Audrey’s attempts to work out what they mean and what they are makes for interesting watching – at least to this watcher. But I love libraries, I love books, I love poetry and I love history. I also love talking about them over a pint so where could this film have possibly gone wrong?

The film is the joint work of Deragh Campbell, who plays Audrey and Canadian filmmaker Sofia Bohdanowicz. There is, apparently, another film, Never Eat Alone (2016), which features Audrey’s character that I’m going to have to track down. I’d watch a series featuring Audrey. She’s a character worth following.

The film feels like a documentary, which as it is loosely based on Bohdanowicz’s family isn’t surprising. There’s a party for the 60th Wedding Anniversary of an elderly Polish couple, which features members of Bohdanowicz’s family, which has all the realistic awkwardness of a genuine family event.

I loved this film and I loved this character. I loved that it tried to say a lot in a short space of time without ever feeling the need to rush anything. But as I said at the beginning sometimes you can feel like a film is made just for you.


* You can’t take coffee into a research library. He knows that. We know that and Audrey knows it to. I think she’s just fucking with him a little at that point.