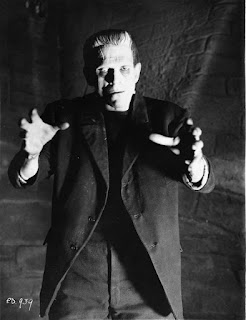 Daniel White dug through his vast horror film collection and is now rewatching a box set of classic monster movies from Universal. For his first Universal Monster of the Week, he looks back at Frankenstein...

It's amazing, when you think about it, that films released decades ago can still have such a profound effect on audiences now. Despite the colossal leaps made in technology, despite audiences which now bay for more and more blood and gore, which make films from back then look and feel positively tame by comparison, they still hold power over us. Nowhere is this more evident than in the classic Universal Monster films and now, revisiting them in all their blu-ray polished glory, I felt it was time to celebrate them again.

In the box set, Universal have brought together eight of the classic horror films that have only grown more potent with time. I begin with one of the greatest and most profound, certainly my favourite of all the tellings of the battle of one man to play God. 1931 saw the release of a film that would stand for all time as the definitive Frankenstein film. This version of Frankenstein, like the other seven films in the set that we will be discussing over the next few weeks, pitches its titular character not as a protagonist, a monster, but as a victim. But it starts, as these things always do, in a graveyard.

I love graveyard sequences in horror films, so atmospheric and always a sign of the death to come. Frankenstein is an old film and yet, thanks to technology, the black and white film looks sharper than I could hope for. The opening funeral scene makes me laugh, it's so unsubtle. Pan shot of the mourners, standing respectfully at the graveside, mourners cry and oh there's the grim reaper! Of course it's a statue but it's such a striking image, death grinning as others mourn, admiring his handwork perhaps. This graveyard is old and even the stone crosses seem to mock the very order of life followed by death. They are all slumped, not respectful, like they no longer believe in their own very purpose. Frankenstein is, after all, about one man's attempt to play God, to prove that the order of things is not the way it needs to be. As in the stories of old, mankind is trying to transcend and to become Gods over themselves. It won't end well but you can't fault a man for trying!

Someone should have told Henry Frankenstein a few things before he started. Firstly, if a man is hanged, then his neck is almost always broken rendering his brain useless, but not before poor Fritz has risked his life cutting the corpse down. Secondly, never trust a brainless oaf with the task of procuring (stealing) a brain. Thirdly, a wooden door isn't going to cause an enraged monster too much of a problem. Frankenstein, so focused on inverting the world order didn't think of the terrible consequences should he succeed. But then, when do they ever? As Dr Malcolm once commented in Jurassic Park "Your scientists were so preoccupied with whether or not they could, they didn't stop to think if they should" Whether Frankenstein was overcome with a desire to push the boundaries of science or whether it was simply a case of the "God Complex" the end result is a man who will stop at nothing to jump-start the spark of life. 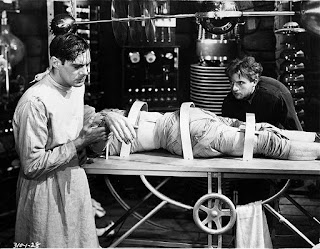 Whilst the focus of Frankenstein has always been with the "It's alive, it's alive" maniacal laugh and giggles scene there is so much more to enjoy than Frankenstein's delight in his success. The order and properness of the time seems to clash beautifully with the carnage and destruction that is to follow. A wedding disrupted by The Monster's appearance and then permanently destroyed as Frankenstein is killed by his own creation (needlessly Messianic possibly but I love the windmill ending.) But if Frankenstein didn't understand his own actions, what about the poor stitched together corpse(s) he reanimated. This is the brilliance of this version of Frankenstein and centres on the performance of Boris Karloff.

Yes, we all know now of Karloff but back then he didn't even get a pre-title credit (The Monster being listed with a ? rather than the actor's name) The decision to portray the monster with deformities rather than full facial prosthetic is an inspired one. It allowed Karloff to portray The Monster with emotion and convey the confusion,  terror and love he experiences as well as the rage and anger we would expect. This allows audience to empathise with The Monster in way that is hard to do with subsequent films (Kenneth Brannagh's 1994 version portrays The Monster as a vengeful, violent and selfish creature.) Who can blame him for murdering Fritz after he had been tortured so horrendously? Even the murder of Doctor Waldman can be seen as self defence and Frankenstein himself as revenge for the horror of a life that had not been asked for. Love too, as the now iconic scene at the lake demonstrates. The Monster is tender and even smiles as he plays with Maria and her drowning was not intentional from his look of sheer panic and he even runs off to try and find help. Karloff portrays The Monster as a reanimated corpse that is trying to learn, trying to become more than the sum of parts he is. Yet he is misunderstood, hated and ultimately destroyed by the vengeful villagers who only see the deformity, the abomination. I would suggest that The Monster shows us more humanity, more soul than we ever see with Henry Frankenstein.

Frankenstein can be seen as a film that documents man's attempts to understand life, its order but also its destructive tendencies. What is normal? What is abnormal? Are we to just accept that murderous and criminal behaviour can be explained by an underdeveloped brain? Or is it possible that deep within us we all have the potential to destroy, to play God and to revel in our own criminality? Reading William Golding's Lord of the Flies or watching the TV show Lost and you quickly discover that we are only held back from our most base desires by society and our own belief systems. I shed a tear for The Monster as he runs blindly around the windmill, trying to survive and, as the flames overwhelm him, gives himself back to death. Sometimes they come back? Well, sometimes they don't ask to!

Perhaps the real reason 'The Monster' is not credited is because Karloff isn't actually playing the real monster. Henry Frankenstein is correct when he takes the responsibility for all that has happened and I would suggest that it is he and not his hapless creation that is the true villain. Karloff is playing just another of his victims with the true horror being what a man will do to further his own ambition. Christopher Lee and Robert De Niro, amongst others, would go on to portray The Monster but none of them got close to Karloff, the actor who gave a soul to The Monster. Karloff was the true Doctor Frankenstein because a spark of life isn't just a jolt of electricity or a beating heart.