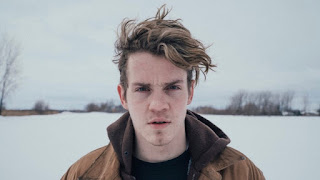 Ren Zelen makes a start on a busy London Film Festival and feels the chill of Ghost Town Anthology, showing next Wednesday and Friday...

The latest feature from French-Canadian filmmaker Denis Côté deals with the effect of an unexpected and mysterious death on the wintry and isolated community of Irénée-les-Neiges, a tiny fictional town of 215 people located in the barren wilds of Québec.

At his funeral the mayor of Irénée-les-Neiges, Simone Smallwood (Diane Lavallée), takes a defensive tone in her eulogy. She calls Simon a ‘fallen soldier’ as if the young man’s death has somehow undermined what she believes is the residents’ unspoken battle to defend themselves against the growing perception that the windswept countryside is itself dying, as rural communities shrink or are abandoned.

Simon’s father Romuald (Jean-Michel Anctil), finds himself unable to help or comfort his wife or surviving son and leaves the town without warning and with no destination, in order to come to terms with his own bewilderment.

Meanwhile, Mayor Simone aggressively refuses the offer of grief counselling from the county office, and she is curt and hostile when a representative arrives despite her protestations.

The Mayor is against strangers meddling in her town’s business and Yasmina (Sharon Ibgui), the county representative who arrives, appears more unfamiliar than most, being a Muslim. Her appearance has already drawn attention at the local restaurant. Mayor Simone is adamant that she is the only person that her community needs and that they are capable of dealing with their own problems. 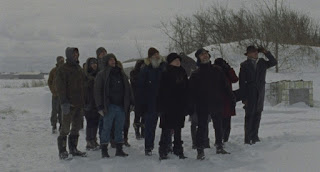 Writer/Director Côté introduces us to some of the villagers - busybody Louise (Jocelyne Zucco) and patient husband Richard (Normand Carrière) come across the body of a semi-consumed deer on their snow-shoeing walk through the winter woods.

A socially-challenged welfare-recipient Adèle (Larissa Corriveau) "a few lightbulbs short of a chandelier", is taken in by Richard and Louise when she is frightened by noises and shadows in her home at night and by the masked kids who are soon joined by a crowd of strangers outside a deserted barn where Adèle had followed them.

Pierre (Hubert Proulx), the owner of the town’s restaurant, wants to buy and renovate a deserted house, despite discovering that years earlier, a demoralized and depressed man committed suicide there after murdering his family.

Pierre's girlfriend Camille (Rachel Graton) is adrift and desperate to move to the city. Jimmy’s best friend André (Rémi Goulet) is as dependent on their friendship for a sense of security and stability as Jimmy was on his deceased younger brother Simon.

It isn’t long before the tenuous threads of these relationships begin to unravel. Simon’s mother Gisele sees her dead son materialize in a deserted locker room and his brother Jimmy’s quest is finally rewarded when he is visited by his late sibling one night at the rink where they used to play ice-hockey.

Simon’s wandering father Romuald picks up a hitchhiker in his car who responds to his questions with silence, then sleeps. In the mirror Romuald sees that he has the face of his son. Once awake, the hitcher simply runs away.

Soon all the townspeople begin to experience increasing sightings of long-dead citizens who simply stand and observe, or in Pierre’s case, prove to be still resident in their former homes. 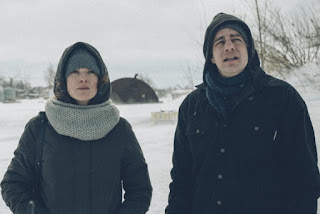 The defiant Mayor Simone must finally accept that Irénée-les-Neiges is becoming what she had always feared - it is literally, a ghost town - something that the authorities confirm is happening all across the rural wastes.

When the fragile Adele again becomes spooked and runs away from Richard and Louise, she is discovered floating, suspended between the living and the dead. The ghost figures have substance but show no malice, not even any real inclination to communicate with the living, they just refuse to go away.

Côté’s film is cleverly poised between social-realism and the supernatural. He uses no music, the scenes play out accompanied by the mournful drone of the cold wind, creating a sense of anxiety and despair rather than the tension of actual horror. The 215 people who still live in Irénée-les-Neiges are almost as inert as the dead that have infiltrated their town, clinging on to a past which will not return since the local economy itself flatlined.

Loosely adapted from the debut novel by Montreal-based writer Laurence Olivier, Côté’s Ghost Town Anthology is subdued in its emotional impact and open to interpretation - a place frozen in the past, containing frigid people who fear outsiders and are afraid of moving on, their existence as moribund as that of the ghosts gathering around them.