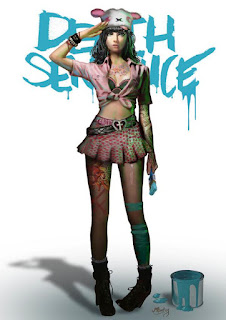 With four days to go on his latest Death Sentence: Liberty kickstarter, comics creator supremo Monty Nero tells us about the big idea behind writing the Death Sentence series...

So – what is Death Sentence Liberty about anyway?

Well, it all started at a comic convention nestled in the Scottish highlands on the banks of the river Ness. It was a wonderful event: relaxed but exciting; informal and unpretentious. Lovely people, warmed by the spring sun; creators and fans mingling as one; families and children soaking it all in without cynicism. It’s still my favourite ever comic event.

One reason for my contentment was the wonderful news that my wife and I were having a baby! It was the kind of news that left you in a grinning stupor - that made you want to buy a hat just so you could throw it in the air and punch your hand through the top, or dance like Fred Astaire. We were very happy.

At the comic con I talked to lots of people about how the comics we were reading didn't seem to reflect the issues we faced in the real world: the language; the tone - the emotional complexities. And on the drive home I realised that I had to put my money where my mouth was.

All the parents we knew were issuing dark warnings that life as we knew it would end in an explosion of nappies, sleepless nights and baby milk. Personally it felt like I only had six months left to realise any artistic dreams before settling down to a life of sober responsibility and fiscal prudence. Which wasn't true – as it transpired - because I’m now more creative than ever and still put my family first in everything. It turns out that a new life is hugely inspiring and a flexible job like writing sits very well with the practicalities of fatherhood. But that powerful feeling of time running out felt very real back then, and it lies at the heart of Death Sentence Liberty: ‘6 months to live – what’re you gonna do with your life?’ In my case I wanted to make a great graphic novel, and I was lucky to find brilliant artists like Mike Dowling, Martin Simmonds, Ben Oliver, and Luke Ross to help realise a collective dream. 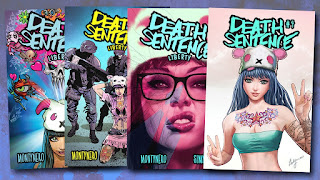 The intriguing question is ‘Why, with what felt like six months to go, was it so important for me to be creative?’ What was it about creativity that was so compelling, so urgent, so life affirming? Why did I feel so validated when I’d finished writing the book? And the answer is, I think, this - creativity is more than ‘art’; it’s an essential component of the human condition.

To me, creativity’s the key reason we’re the dominant species: we can imagine very complex ideas and then make them. It might be a complex engineering project, a sculpture, or a novel. Everyone has innate untapped talents, and if their creativity is stifled it seems like their desire for fulfilment and validation manifests in other ways. Most salaried jobs are restrictive, both in the hours required and the methodologies employed, and the resultant frustration often contributes to a lot of hedonistic or aggressively selfish behaviour, which we portray in the comic. People are looking for validation, and self-expression, in all the wrong places.

There’s also a lot of sex and swearing in Death Sentence Liberty, sometimes at the same time. It’s not a book for everyone, and I advise anyone under eighteen to look elsewhere.

But if these themes resonate with you, do check out our work.

Or create your own work of art.