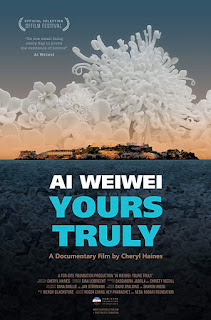 Do one small thing every day to prove the existence of justice. - Ai Weiwei

Ai Weiwei: Yours Truly is a documentary about not just Ai Weiwei, although it is centred on him. It is a film about activism and activists more generally and it is also about the role of art as a political tool.

Ai Weiwei throughout the film talks about the ‘duty’ of artists to use their power politically. The film illustrates that this belief grew out of his childhood and the experience of his father, Ai Qing*, who was a poet. Indeed, he is seen as one of modern Chinas finest poets. In 1957 Ai Qing was exiled to labour farms in northeast China with his family and he suffered too during the Cultural Revolution. So, Ai Weiwei’s battle with the Chinese state isn’t unexpected.

The film mainly focuses on an Exhibition Ai Weiwei put on at Alcatraz Prison in 2014. An exhibition about freedom and resistance. It shows – briefly – the development and planning of the exhibition and talks about what he is trying to do. It’s a huge project.

One of the rooms features Lego portraits of political prisoners from around the world, which leads to the final part of the film which looks at the impact that part of the Exhibition had. They had set-up a series of postcards addressed to those prisoners for attendees at the Exhibition to send to the prisoners. Apparently nearly 100,000 postcards were sent and that latter part of the film explores the impact of those cards on the people they who received them, including Chelsea Manning. For me this was the most moving part of the film. The fact that political prisoners were reminded that they haven’t been forgotten helped to keep them going. The fact that we were remembering them at all. There is something sacred in the act of remembrance that I think we’ve mostly lost here in a more secular world. And meeting the families of these prisoners or the released prisoners themselves is lovely, although Chelsea Manning is back in prison again.

The Alcatraz Exhibition was organised with Ai Weiwei by Cheryl Haines, who directed and is a presence in this film. I’ve watched a lot of documentaries recently and those who make them seem to fall into two broad camps. Those who are the camera not a person and those who make themselves a direct part of proceedings, like say Louis Theroux or Nick Broomfield. I think both are valid approaches, particularly when dealing with a documentary about an individual and that this person’s presence isn’t a distraction. I think though I prefer the filmmaker as an anonymous presence.

This is a really good documentary though that gives one food for thought both about the role of art in politics and the role of us in supporting those activists brave enough, wherever in the world they might be, who are trying to make the world a better place. It also does a good jump of making me like Ai Weiwei and his work. It also restored my faith a little in both humanity and the power of art to change the world, which is no bad thing.

* I tried to find Ai Qing’s poems in English but it looks like there isn’t anything or at least nothing recent or affordable. Perhaps there’s a publishing company out there that might want to do something about that.

Book tickets for Ai Weiwei: Yours Truly at Raindance