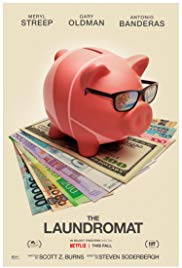 Most of us are not billionaires, most of us do not require a team of people such as financial consultants, tax lawyers, investment bankers and accountants, to help us administer the vast amounts of money we have accumulated. Therefore, most of us are unfamiliar with the various mechanisms which keep the rich so very, very rich.

With his latest film The Laundromat, versatile filmmaker Steven Soderbergh takes us along for the ride when he follows the money on its way to the laundry, in this case a company called Mossack Fonesca, the world’s fourth largest provider of offshore financial services and owned by Jürgen Mossack (Gary Oldman) and Ramón Fonesca (Antonio Banderas).

Soderbergh’s film chronicles the 2015 real-life ‘Panama Papers’ incident, during which 11.5 million documents giving detailed information on over 200,000 offshore entities were leaked. The information exposed large-scale tax avoidance and a plethora of illegal activities by wealthy businesspeople, corporations, politicians and criminals concealing their assets. 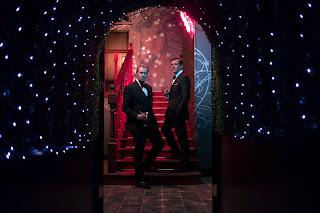 However, it’s clear from the opening sequence that The Laundromat is not going to present this scandalous and sobering information in the form of a grim drama, on the contrary, Oldman as Mossack and Banderas as Fonesca begin the film by speaking directly to the camera – they are going to tell us about “the secret life of money”.

Forthwith they will amble through the film wearing a series of flashy tuxedos, expensive suits and brocade smoking jackets, often clutching a cocktail as they explain how billions can be hidden using futures and equities and a proliferation of shell companies.

The film uses an episodic structure designed to illustrate the extensive use of shell companies and the corruption that ensues from the accumulation of wealth. It follows several characters through various vignettes, the first of which is Meryl Streep’s Ellen Martin, an ordinary woman who loses her husband (James Cromwell) in a tragic ferry accident during which 21 people drown.

The ferry owners (Robert Patrick & David Schwimmer) discover that the insurance policy they had taken out and that they were counting on to recompense the bereaved, is a cunning scam.

The insurance plan they were contributing to turns out to be part of a system of companies run through a con man in the Bahamas, glorying in the name of Malchus Irvin Boncamper (Jeffrey Wright).

Ellen Martin’s compensation check ends up being a fraction of what it should have been, meaning that she also loses out on a new condo she had been hoping to purchase. It is sold out from under her to those who can pay over the odds and in cash, namely, Russian ‘entrepreneurs’. 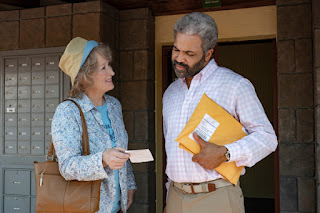 In another sequence, we meet Charles (Nono Anonzie), a very rich businessman who happens to be having sex with his daughter’s college roommate. When his daughter Simone (Jessica Allain) discovers the affair and threatens to tell her mother, he uses bearer shares as capital with which to bribe his daughter into silence, illustrating how the rich can also use imaginary accounts as weapons to confound their enemies, or their families, once they are of no further use to them.

In one segment Matthias Schoenaerts plays Maywood, a British financial go-between, whose over-confidence and greed foolishly get him too involved in the very dangerous, and even fatal, intrigues of Chinese modern-day politics.

Unsurprisingly, the subject matter of the film is convoluted and sometimes not easy to explain. Soderbergh gets around this problem by putting a human face to the complex data, revealing how financial corruption affects simple, honest, ordinary human lives.

Considering the allegations currently flying around about how dirty money may have been syphoned into the Trump and the Brexit campaigns, it may seem timely for a film to point out that when the wealthiest 1% engage in nefarious practices to influence others or preserve their wealth, it damages everyone else in the world. It deprives children of schoolbooks, the sick of adequate healthcare, small towns of decent transport systems and infrastructures and so on. As Mossack Fonesca’s rule number one reveals - ‘The Meek get screwed’.

Soderbergh and his frequent screenwriter Scott Z. Burns used Jake Bernstein’s book ‘Secrecy World’ as source material to craft a funny, compelling, and ultimately shocking film. Despite the heavy subject matter, The Laundromat proves to be Soderbergh at his most playful, playing like a satire with an undercurrent of pure evil, the film flashes by in its run-time of 90 minutes.

However, The Laundromat offers no happy ending or clear-cut resolution - writers Burns and Bernstein apparently spoke to the real Mossack and Fonseca, who spent only 3 months in jail and demonstrated little remorse for what they did. The fictionalized Mossack and Fonseca explain that they are just the tip of the iceberg and it’s already too late – the system is thoroughly compromised and everyone is dirty.

Find The Laundromat on Netflix