Anime Day - Anime and Me 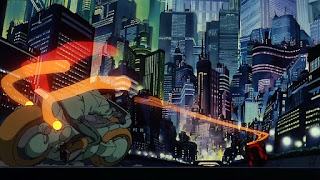 Susan Omand has a quick look back to where her love of anime started...

I love animation, as you know, and Japanese animation especially. I was thinking back to where my fascination with anime began and I discovered that I didn’t start watching anime films until I was grown up, the first being the classic Akira, whose batshit craziness I first watched in the early 90s and still watch fairly regularly, just to top up the obsession. Yes, I was immediately hooked and started to devour all the anime I could find. At the time I was limited by what was available from digging through the (very small) anime shelf in the local video shop and library (remember that Amazon and internet shopping wasn’t a thing yet) however I managed to watch a pretty good cross section; Fist of the North Star and Golgo 13: The Professional as I indulged myself with the, shall we say, more violent end of the spectrum, which contrasted wildly with the stunning, both visually and emotionally, Grave of the Fireflies, my introduction to Studio Ghibli, and the film that’s still my favourite anime, the subtly nuanced Ghost in the Shell (we shall not mention the live action remake).

Fast forward a few years and I discovered Hayao Miyazaki and his beautiful work in Spirited Away, Princess Mononoke and Howl’s Moving Castle then, coming right up to date, another Studio Ghibli offering with The Tale of the Princess Kaguya from Isao Takahata, who also wrote and directed Grave of the Fireflies.

However, it struck me that I’d actually been watching the work of Japanese animators a lot earlier in life than I first thought – many of the kids cartoons in the 70s and 80s started life on Japanese drawing boards.

Around the World with Willy Fog


And my absolute favourite as a kid, I remember it as if it was just yesterday…

Battle of the Planets!