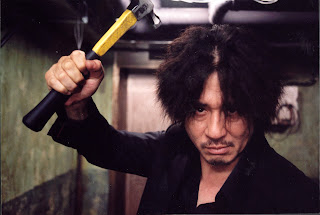 Based on a manga of the same name, a reminder of Ruairi B's thoughts from earlier in the year of the 4K restoration of the classic Oldboy...

Park Chan-Wook’s Oldboy is a film that had an immense impact on me when I first saw it and is one of the films that made me want to seek a job within the film industry itself. Needless to say, I hold the film in very high regard and I have no shame or hesitation in saying it may well be one of my favourite films of all time.

Oldboy has returned to cinemas in 2019 in a 4K restoration of the 2004 original and, while I feel enthusiastic about reviewing it, it’s difficult to know where to begin.

Oldboy follows the story of Oh Dae-su, an obnoxious drunk, but also a married man with a young daughter. Out of the blue, Dae-su is abducted without a trace and imprisoned in a private cell, completely cut off from any outside interaction (other than television) for fifteen years.

Almost driven to the brink of insanity, Dae-su is then inexplicably released and encouraged to track down the person responsible for his imprisonment and discover the reason why it was done, in a tale that spans murder, romance, tragedy and the truly destructive nature of revenge.

It’s not well known, but Oldboy is actually based on a Japanese manga of the same name. However, the film only takes inspiration from major plot-points. Director Park Chan-Wook has created his own interpretation - his characters are far more developed than in the Manga and the tone and dialogue are in his particular auteur style. He has changed the setting to his home country of Korea and reformed the story to match his own vision. The comparisons between the manga and film would require a completely different article (the manga stretches across 79 chapters) but, in short, the film stands entirely on it own merits, (which is probably why the manga is rarely discussed).

From a narrative standpoint, Oldboy is nearly flawless, albeit having a story that’s much larger-than-life compared to Park Chan-Wook’s previous Sympathy for Mr Vengeance (a criminally underrated arthouse revenge-tragedy and the first film in the Vengeance Trilogy, Oldboy being the second). 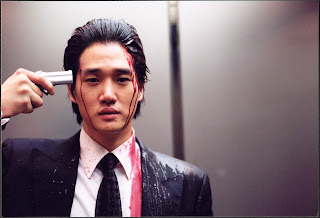 The Koreans have always loved their revenge films and they’ve always been the best at making them, but Oldboy is in another league - it might be seen as a modern-day Greek tragedy and executes its narrative with explorations of the deepest depths the human heart can go to when consumed with despair, loss, hatred and love. Only the most jaded filmgoers will feel the need to critique the story’s use of mystical, over-the-top plot devices, but it’s worth noting it won’t appeal to everyone.

Also, the story wouldn’t be half as impactful if not for the stellar acting performances throughout, particularly by Choi Min-sik as the protagonist. Min-sik’s performance displays truly convincing anguish, confusion and genuine emotion without a singe slip-up, and it’s a performance I hold in the same regard as De Niro’s acting in Raging Bull and Day-Lewis’s performance in There Will Be Blood. It is simply one of the best performances on film. There isn’t a single moment where Dae-su doesn’t appear to be a fully fleshed and real person, caught up in the most elaborate and orchestrated vengeance planned by a madman, and with nothing else to live for.

Of course, in saying this, the performances by Yoo Ji-tae as the antagonist (Woo-jin) and Kang Hye-jung as Mi-do (Dae-su’s love interest), as well as all supporting roles, are outstanding and bring the on-screen story to life with a certain magic and vividness that’s rarely accomplished in film-based storytelling. But note, this story isn’t afraid to break taboos or show shocking scenes of violence, but I feel Oldboy tackles its darker themes with tact and maturity, using violence in an emotional way and without feeling gratuitous, which suits the story and tone - it never feels exploitative. The more extreme aspects of the film are used to cleverly subvert our expectations.

Regarding Oldboy’s technical aspects, the cinematography throughout is flawless. From the superbly constructed, photo-esque static shots, often portraying characters standing still before a dramatic event, (such as Mi-do holding up dumplings for Dae-su as a way of leading them to where he was imprisoned, or a still of Dae-su raising his hammer while preparing to strike a guard, who’s frozen in anticipation before the attack), to the masterfully calculated split-frame sequences present during Dae-su’s escape and Woo-jin’s reveal (at the beginning and end respectively), to the iconic corridor long-shot of Dae-su fighting his way through insurmountable odds (a shot breath-taking in the chaotic nature of the choreography and the deliberate sloppiness of the fighting, giving it a more natural feel; a trait which most action-based films seem to lack). There isn’t a single rough patch in the camerawork or visual language throughout and, as stated before, it’s one of the films which made me want to work in the craft (I especially admire the cinematography). 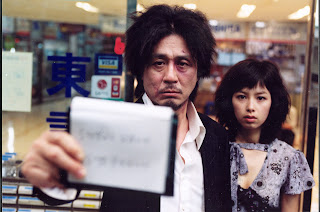 As for this 4K remaster. There’s a shot about a third of the way into the film which blew my mind back during my first viewing, where we see a close-up of Dau-su slowly track out between two chopsticks he’s holding up, eyeing a fried dumpling. I was bemused back then as to how they managed such a shot, as it appears the camera would have to be minuscule to be able to fit between two chopsticks! However, during the 4K remaster I noticed a slight blurriness around Dae-su’s hand and the chopsticks, leading me to theorise that we’re actually looking at a standard track-out close-up of Dae-su with the hand and chopsticks added in post, likely through a chroma-key method. However, I’m still not a hundred percent convinced that this theory is correct, which is all credit to the seamless filmmaking. Either way, this goes to show that, while the 4K remaster brings Oldboy’s magnificent visual style into the modern, a sharp eye may be able to pinpoint the rougher visual effects as well as be distracted by the slightly dated CGI, such as the ant appearing in Mi-do’s flashback (which still feels bizarre). But this is just pedantic nit-picking from an avid fan, Oldboy holds up better than ever and still proves to be a technical marvel.

The soundtrack also deserves its own mention. From the pulse-pounding melody that kicks in within the opening minutes to the recurring, melancholic main-melody of the film which recurs throughout (initially accompanying the sleeping gas-release in Dae-su’s cell, coming back as the ringtone for Dae-su’s phone, to being the tune Woo-jin hums before the big plot twist), Oldboy’s soundtrack is among the very best. It deserves to be mentioned, as it’s crucial in setting the mood and tension of this Greek-tragedy revenge journey as much as any other aspect.

Personally, I find it hard to pinpoint any major flaws and, believe me, there are very few films I feel to be nearly devoid of negatives, but the main faults in Oldboy tend to be on a more subjective level. Some may find the story to be too dark and twisted for their tastes, some may find the use of far-fetched plot devices might ruin their immersion in the narrative, but I find this criticism hollow when the entire point of the film is to be mythical, theatrical and emotional, and not grounded in realism.

When the writing, performances and execution reflect a team of filmmakers and actors so passionate and genuine about the film in every single shot, frame and line, I find it impossible to not be enthralled. Anyone remotely interested in the art of film owes it to themselves to see Oldboy if they haven’t already and there’s no better time to start than with this beautiful restoration.

Review © Ruairi B 2019 All rights reserved