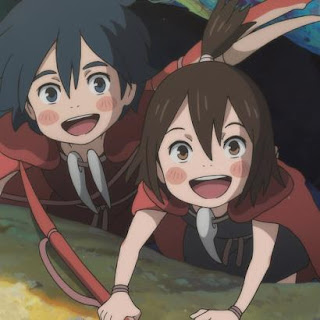 I’m a fan of anime, especially the work of the much-missed Studio Ghibli. If you know me, you know this. So I was really surprised, and very pleased, to see that a small Studio Ponoc showcase was being screened as part of Edinburgh Film Festival. “What is Studio Ponoc?” I hear you ask. Studio Ponoc has taken up the mantle left by the closing down of Studio Ghibli in 2014. It was formed by a team of Ghibli’s directors and aims to carry on the distinctive graphic storytelling tradition for which Ghibli was so well known.

And this anthology of short animated films certainly is distinctive. There are three stories all together, all different, and all child friendly (something else Ghibli was very good at). 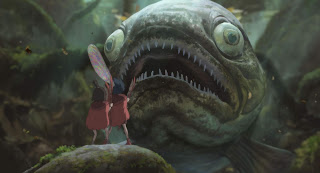 The first is Kanini and Kanino by Hiromasa Yonebayashi. In a land where fairies have dragonfly tails, Kanini and his sister Kanino are tiny water-nymphs who live with their parents in a fast-flowing river, catching fish with spears made out of freshwater prawn claws. One day their mother, heavily pregnant, disappears and, in a big storm, their father gets swept away after rescuing Kanino from being caught up in some seaweed. All this happens as the shadow of a big carp looms overhead. Will they find their parents and be safely together again?

The animation was beautiful in this one, especially the movement of the water and weed, and the colours were gorgeous. There was no real dialogue but the music, by Takatsugu Muramatsu, was so evocative and mood enhancing that it wasn’t needed to tell the story which was full of happiness, drama and suspense. 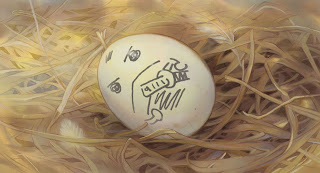 The second film was called Life Ain’t Gonna Lose by Masanori Shimada and was about a little boy who had a severe allergy to eggs and all egg products, meaning that he could go into anaphylactic shock, and how he and his family coped with it.

It was the story more than the animation that grabbed me this time, the differing reactions to the boy Shun’s allergy, from children, adults and the school authorities were acutely observed and I could really understand the thin tightrope that his parents had to walk, stopping him from doing something stupid and trying to stop him from being so frustrated by it all but, at the same time, trying not to restrict him, or allow him to be restricted, in what he could do. It really brought home to me the difficulties involved, both physically and in combatting attitudes and limitations, that having such an allergy would bring and I think this would be a great cartoon to show in schools and beyond, to raise awareness of the issues. 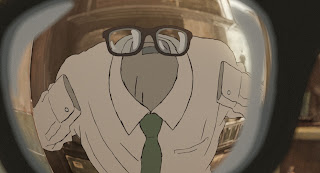 However it was the third film, Invisible by Akihiko Yamashita, that I enjoyed the most, even though (or maybe because) I understood it the least the first time I watched it. Using a much more painterly style than in the previous two films, Invisible follows a literally invisible man as he goes about his day, from when he gets up and dressed, to his job in a car showroom, to problems buying food in the supermarket. No explanation is given as to why he is invisible, or what made him that way, nor for why he always has to carry something heavy – a dumbbell, a fire-extinguisher, a pickaxe – to stop himself floating away, which he does accidentally at one point only to be brought back down to earth with a bump. As I watched the film again though, it suddenly struck me that I was maybe taking it too literally. What if the man wasn’t actually invisible at all but it was all a metaphor for those isolated by society, for who are not “seen” as they go about their day, no matter how hard they try, a metaphor for those whom nobody would miss if they just gave up, let go and floated away. A metaphor even down to the guide dog of a blind man being the first one to “see” him near the end, it ended up being a much heavier film than I was expecting. And I loved it.


A successful showcase then, displaying such a diversity of imagination and a willingness to step outside the, albeit fun, blockbuster superheroes and violence of other anime studios, it is truly heartening to know that the innovative legacy of Studio Ghibli will live on in the highly creative hands of Studio Ponoc.