Anime Day - Isao Takahata and The Tale of the Princess Kaguya 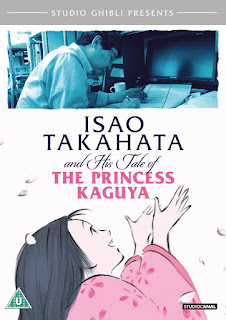 A reminder of Susan Omand's thoughts on the documentary about Studio Ghibli co-founder, Isao Takahata and The Tale of the Princess Kaguya...

Read Susan's review of The Tale of the Princess Kaguya here

The Tale of the Princess Kaguya was to be the first film in 14 years for the 70 year old (at the time) animation director Isao Takahata and is based on the old Japanese folk tale of The Tale of the Bamboo Cutter where, born from a bamboo plant, the ethereal princess rejects five suitors, even the emperor, before returning to “the moon” and losing all memory of the earth.

As a fan of all animation, but particularly Japanese anime, it was incredibly interesting to see the processes that the director went through with the film and, because the documentary was filmed at the same time as The Tale of The Princess Kaguya was being made, as a work in progress, you feel like you are on the journey with them rather than being told about it after the event. Production started with the voice soundtrack and I was surprised, although thinking about it it made sense, that this was the first thing recorded, with the animation being drawn afterwards to fit in. Watching the readthroughs, with the director having to explain various points of the story itself and what he wants to the actors, was fascinating and seeing things like the actor playing the venerable grandfather being told he was being “too dignified” and to play it “A little more bouncy and breezy” was fun as the actors tried take after take and you could really feel tensions rising on both sides. The discussions with the sound designers were insightful too, as they also steered the direction, and the director, of the film by trying to find levels of compromise in the recording where vision and reality collided.

As the recording progressed with different actors you could see Takahata consolidating his own visual ideas of how the animation would look. As Takahata says himself when asked by an interviewer at the very start of the documentary “What kind of movie are you trying to make with The Tale of The Princess Kaguya?” he answers, “How would I know? Does any director think about that?” and, watching the evolution of the film throughout the documentary, I can understand that imposing strict rules and guidelines at the start would have hindered the creativity of the film greatly. He says that he doesn’t want to tell the actors what to do but they have to be free to use their own imaginations and build their own characters which Takahata will, literally and figuratively draw from. 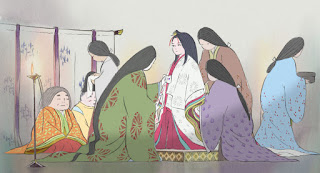 As an aside from the making of the Tale of The Princess Kaguya itself, we got a brief history of Takahata’s other work and I was surprised to find that some kids' animations that I’d watched in the dim and distant past, particularly Heidi and Anne of Green Gables, were his work even before he founded Studio Ghibli with friend and fellow animator Hayao Miyazaki, a studio which went on to create well known animations such as Spirited Away and Howl’s Moving Castle.

The documentary also went on to look at why it took 14 years between his previous film, My Neighbours the Yamadas, and getting round to making this one. A lot of it had to do with the process of cel animation, which Takahata shied away from with the Yamadas as he was bored with it. That film threw Studio Ghibli into chaos as staff had to learn new skills for the Yamadas, it was a box office flop because it was so unlike any other Studio Ghibli film and Miyazaki swore that the studio would never do another film like the Yamadas again. It was up to young producer Yoshiaki Nishimura to convince Takahata to make another film and it took 18 months of constant badgering for him to agree. Then, because Studio Ghibli couldn’t, or wouldn’t make the film, Nishimura had to set up a completely new facility, Ghibli Studio 7, for the animation process.

Astonishingly for an animation director, Takahata doesn’t draw and works with written and verbal communication rather than his own story boards, relying on others like head animator Osamu Tanabe to pull the images from his words and actions. Takahata's aim is to capture the passion in “quick and dirty” sketch line drawing that cel animation usually loses with fine finishing. This throws the animators, who are not used to that style, but does have a fantastic energy when you see it. The backgrounds for this film too were radically different, light sketches, watercolours and lots of white space rather than the blocks of bright colour and high detail normally associated with Ghibli, making it feel more grounded in reality, in Japanese fable, than a normal animation. As it is all hand drawn and painted, the movements have to be captured in minute detail and then fed into the Quick Action Recorder to check the movement is fluid and “looks right,” moreso than adhering to any rules, with frame by frame adjustments and a lot of trial and error. All this however means the film runs behind schedule and the release date is pushed back to summer 2013 and then postponed completely. 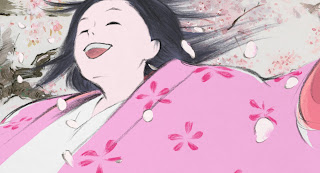 Because this is a two part documentary there was quite a bit of recap then the second part of the film concentrated on the music that would accompany the film as well as the problems with the artwork. The job of soundtrack composition falls to one man, Joe Hisiashi, who had worked on an animation Takahata had produced 30 years before. One of the most notable songs of the soundtrack for The Tale of The Princess Kaguya is over the final scene, where the Princess returns to the moon. Takahata wanted something that didn’t convey the emotion directly and didn’t give a clear resolution as that was a big part of the film, the ambiguity. It is difficult (and must be hugely frustrating), for the composer to work with a director who couldn’t and wouldn’t give him clear direction, only deciding what he doesn’t want when he hears it. With the composer in place though a new release date is set for the autumn and it’s all systems go to get finished in time, although Takahata, being the creative that he is, resists planning and scheduling til the last possible moment, concentrating on a new scene to the film that isn’t in the original story, a complex flying scene involving CGI 3D work on the 2D watercolour images.

With the retirement of Studio Ghibli partner Miyazaki making big news, Takahata’s thoughts finally turn to completing the film and the release date is finalised as 23rd November. However, even at this late stage, he makes a radical change to the storyboard for one scene. The new animation and yet another alteration to the music works and he is finally happy. Late nights and long hours and the beautiful Tale of Princess Kaguya is finished after eight hard years of work.

So what did I learn from this? That working with creatives who refuse to plan or stick to schedules is always difficult. I learned that everyone, creatives, producers, EVERYONE underestimates the amount of work that goes into animation of this nature. I know I thought it was a lot but multiply it 10 or even 100 fold and you’re not even close. And I learned that, with the right team, there is always a way to achieve your goal no matter what the obstacles. But the great thing is, all of that shows in the final product. The quality and vision is superb. As Takahata himself said,

“When everyone thinks it is theirs you get a good movie.”