Animation - The Tale of the Princess Kaguya 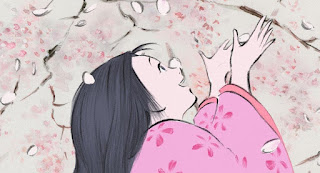 Film4 are doing a Studio Ghibli season on TV just now. Susan Omand treated herself to a morning watching The Tale of the Princess Kaguya...

As you probably know I am a big fan of animation, anime in particular, and Studio Ghibli have long been one of my favourite production houses. So when I saw that Film 4 was running a season of their films, I couldn’t not watch at least one and this is one of my favourites.

It’s based on an ancient Japanese folk tale where a bamboo cutter finds a baby inside a glowing bamboo shoot in the forest and takes it back to his wife in their lowly cottage in the village where they raise the child as their own. The girl grows quickly, like a bamboo shoot, soon makes friends with the other children in the village, who call her Little Bamboo, and has a happy time playing among the plum blossoms. However, the bamboo cutter has higher hopes for her future than living and working in the village, especially after he finds gold and fine clothes in other bamboo stalks in his crop, and he decides that it is the will of heaven that he build a mansion in the city, fit for his Princess, move the family there and make sure she is schooled in the ways of society so that she will marry a wealthy man and be happy. But happy is the one thing she can never be in such an alien environment, with the weight of expectation heavy on her shoulders and she says she would rather die than marry any of her suitors, including the Emperor himself…

As folk tales go, this has everything you need, with magic readily accepted, enough weirdness to keep you on your toes and a truly dark and melancholy reality never far away. There’s a love story of sorts, challenges to be overcome, vivid dream sequences and pivotal moments that change the course of events irretrievably. As a coming-of-age film too, the moral of the story is as relatable now as it was over a thousand years ago, in a way, because when you’re growing up, there always seems to be someone in authority who knows how to “do” your life better than you and who pushes you into their version of you being happy.

For an animation, it also mustered a very strong cast for its English over-dub, with Chloe Grace Moretz as the Princess, Lucy Liu as her tutor and the venerable James Caan as the Bamboo Cutter. And that’s before we even get to her regal suitors – Dean Cain, John Cho, Daniel Dae Kim, James Marsden, Oliver Platt and Beau Bridges. Getting actors of this calibre involved in Japanese animations was pretty rare at the time and, I think, showed a high level of respect for both the director Isao Takahata and his work with Ghibli.

However, for me, The Tale of the Princess Kaguya is all about the look of the film. It. Is. BEAUTIFUL. Taking over 8 years to make, the animations were all hand-drawn and animated using old style cel animation processes. As a result, the finished film looks much less “cartoon-y” and more like the Japanese ink and watercolour paintings from centuries ago. At the time it was released, in 2013, this totally bucked the trend of bright blocky colours and all-action, comic-book styling. You can find out more about the techniques, and the setbacks, in making the film from the fascinating documentary “Isao Takahata and His Tale of the Princess Kaguya” (read my review of that here) but you can see that this was a labour of love for all concerned and it’s understandable that the film was nominated for several awards, including an Oscar nod, although it lost out on winning to Big Hero 6, ironically a film that was a look at Japanese culture through the eyes of comic-book America.

There are plenty other anime films, both in the Ghibli stable and beyond, that are absolutely worth a watch but I think The Tale of the Princess Kaguya provides an ideal jumping on point for novices of the genre because it is, on the surface at least, a nice easy story to get to grips with, with low levels of confusing anime weirdness and no horror or gore. Instead you are left at the end, saddened but satisfied, with that slightly disoriented feeling as if you’ve just woken up from a beautiful dream…

You can find the list of other Ghibli films that Film Four are showing HERE – check back regularly for updates.