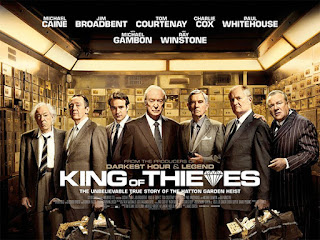 "One high security vault. Millions up for grabs. One hell of a retirement fund." Watch the trailer for heist comedy King of Thieves...

Based on real events and with a screenplay developed from Mark Seal's Vanity Fair piece 'The Over the Hill Mob', the film tells the story of the epic multi-million-pound Hatton Garden Jewellery Heist, initially believed to be undertaken by a gang of super-thieves. The actual perpetrators were a group of tough-guy retired criminals in their late 60s and 70s — with all kinds of physical maladies — who were mostly unoccupied and bored, until they consulted a bunch of how-to books and figured out a way to pull off one last hurrah over a long weekend in April 2015.

Entering the Hatton Garden Safe Deposit Company property via a lift shaft, they drilled through the 50cm thick vault walls with heavy machinery and escaped with a haul estimated to be worth around £200 million.

Sounds like a fun premise for a film. And when that film is the latest film from British filmmaker James Marsh (The Theory of Everything, Man on Wire, Project Nim) and stars Michael Caine, Jim Broadbent, Tom Courtenay, Charlie Cox, Michael Gambon, Paul Whitehouse and Ray Winstone, it's got to be worth at least watching the trailer...