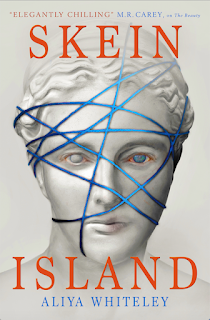 "Every story needs an ending. Whatever the cost." Titan Books announce the release next month of Aliya Whiteley's latest speculative fiction; welcome to Skein Island...

"Skein Island, since 1945 a private refuge for women, lies in turbulent waters twelve miles off the coast of Devon. Visitors are only allowed by invitation from the reclusive Lady Amelia Worthington. Women stay for one week, paying for their stay with a story from their past: a Declaration for the Island’s vast library.

"Marianne’s invitation arrives shortly before her quiet life at the library is violently interrupted, the aftermath leaving her husband David feeling helpless. Now, just like her mother did seventeen years ago, she must discover what her story is.

"Secrets are buried deep on Skein Island. The monsters of Ancient Greece and the atrocities of World War II, heroes and villains with their seers and sidekicks, and the stories of a thousand lifetimes all threaten to break free…"

A story about stories, how we tell our own and who we tell it to, Skein Island is a beautiful and haunting work of speculative fiction from one of the genre’s fastest rising stars. Published with the companion novellete, The Cold Smoke Declaration, Skein Island is fascinating observation on the roles we play, how they form, and how they divide us that will delight fans of John Wyndham and Kirsty Logan.

ALIYA WHITELEY was born in Devon in 1974, and currently lives in West Sussex, UK. She writes novels, short stories and non-fiction and has been published in places such as The Guardian, Interzone, McSweeney's Internet Tendency, Black Static, Strange Horizons, and anthologies such as Unsung Stories' 2084 and Lonely Planet's Better than Fiction I and II. She has been shortlisted for a Shirley Jackson Award, British Fantasy and British Science Fiction awards, the John W Campbell Award, and a James Tiptree Jr award. Her stories are unpredictable; they can be terrifying, tender, ferocious and deeply funny. She also regularly reviews film, books and television for Den of Geek. She blogs at: aliyawhiteley.wordpress.com and she tweets most days as @AliyaWhiteley.

Skein Island is published by Titan Books on 5th November