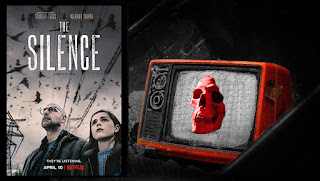 We love Halloween here at The DreamCage and we love the countdown to it even more as, every day in October, David Ames opens a window (well, writes an article) in his Hallow-vent Calendar of horror films. His choice for Day 17 of Hallow-vent is The Silence... 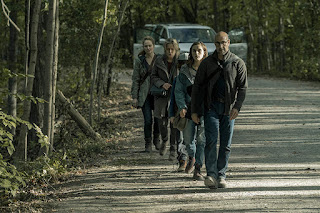 Although the post-apocalyptic genre has had a massive explosion in the last decade, and a lot of those films are complete and utter derivative trash, I still have a soft spot in my heart for the genre. The idea of struggling to survive against a world that so obviously wants you dead is an enduring human theme and says so much about humanity’s desire to live and thrive in the face of utter destruction. Sadly, today we look at one of those films that falls into the former category of derivative, and borderline plagiarism. Today, we look at 2019’s The Silence.

The Silence begins with two scientists who are spelunking in an uncharted cave system in Pennsylvania. As they break through a rock wall that seems to cover a massive cavern, countless dinosaur-like creatures with wings emerge and systematically slaughter the entire crew.

We then cut to a young high school girl, Ally, who has recently suffered an accident and gone deaf. While she is bullied by some of her classmates, there is still a dreamy young man who walks her home, and the romantic feelings between the two are palpable. While at home later that night, Ally and her beau are texting when he sends her a crazy video of a swarm of something. Later that evening Ally’s family, father and mother Hugh and Kelly, grandmother, and little brother, are all glued to the television where news reports are pouring in about the strange creatures, eventually known as Vesps, which have decimated major US cities, and whose presence is spreading all over the country. The only advice people are given is to stay quiet.

Hugh’s best friend and employee, Glenn, flee the city and drive out the country in hopes of finding refuge. After a car accident, the family, now without Glenn, make their way through the forest and discover a cabin in the woods where they can hide out. Kelly was attacked by one of the creatures, and Hugh and Ally travel into town to get antibiotics. While there, they are confronted by a reverend who asks them to join his congregation. As they leave him, we see that his tongue has been voluntarily severed.

Later that day the reverend and his strange flock arrive outside the cabin, asking for the family to join them, and to follow their example. When Hugh asks them to leave, the reverend mentions the fact that Ally is fertile, and Hugh forces them to leave the land at gunpoint. 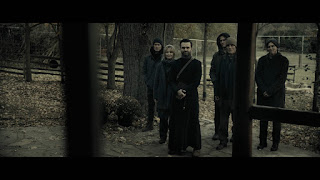 I don’t need to tell you much more. The film itself, based on what I can only imagine is a much more solid novel by Tim Lebbon, is pretty rough. The pacing is off completely, and we are given next to nothing to attach any emotion to most of the characters. They all come across as two-dimensional stock characters, not because of the performances, but because of the atrocious writing and plot development.

With such a wonderful cast, you would think that this film would be solid. Stanley Tucci is a convincing father, struggling with being comforting and strong. Miranda Otto is serviceable as a worried mother, but isn’t really given much more than that. Kiernan Shipka is the best part of this film, and even she isn’t given a great storyline or dialogue to work with. All of these cast members do their best and it is only the cast that keeps this film from sinking miserably.

After watching, I had to wonder whether or not there is a ton of footage which has hit the cutting-room floor. The story jumps ahead at a strange pace, and every major revelation of story is bogged down in trying to navigate through the myriad of plot holes. For instance, although Ally is deaf, we see her talk to people constantly and hear what they have to say, even when she isn’t looking at them. For another thing, they are only on the run for 2 days before they meet the reverend and his cult, and already they have severed their tongues and are trying to repopulate the Earth, I think? Their motivations are never made clear.

In successful post-apocalyptic works like The Road, The Last of Us, The Book of Eli, and Snowpiercer, the stories all stem from the struggle for survival. We are given some of that but there is so little character development that we aren’t allowed to watch these characters adapt and grow.

Also, the CGI is just…just terrible. It is Justice League bad.

The last thing that needs addressed is the obvious connection to A Quiet Place. While this film was made at the same time as AQP and is actually based on a book, it is hard not to draw a comparison. There is a family struggling to survive in a world where monsters have destroyed almost all of humanity. These monsters hunt strictly by sound. Also, the family has a deaf young girl who ends up being one of the main protagonists. At least in AQP the deafness makes sense and is a logical part of the story. In The Silence, the deafness seems more like a means to an end, a crutch that the filmmakers were trying to utilize in an attempt to add depth, but instead it just comes across as surface-level exposition fuel and nothing else. It could have been used to add dread and tension but is never once used in this manner.

In the end, this isn’t the worst film I have ever seen, but it is the worst Netflix original work that I have experienced. Even this wonderful cast couldn’t save a film that markets itself as a post-apocalyptic horror film, but lacks any sense of dread, fear, or excitement.

Find The Silence on Netflix