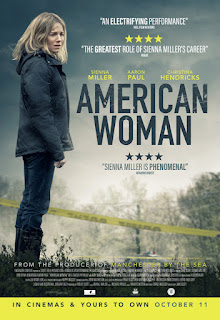 In cinemas and on DVD tomorrow and Blu-ray next week, Steve Taylor-Bryant watched American Woman...

In a small, blue-collar town in Pennsylvania, a 32-year-old woman's teen daughter goes missing and she is left to raise her infant grandson alone. The story is told over the course of 11 years, from the time her daughter vanishes, through the trials-and-tribulations of subsequent years looking for closure, leading up the long-awaited discovery of the truth.

I had a quick look at Jake Scott’s directorial list before watching American Woman as I recognised his name from somewhere but wasn’t sure I had seen any of his films but it turns out Scott is the genius behind Plunkett & Macleane so, with a script from Out of the Furnace scribe Brad Ingelsby, I was quite excited for what should be a good entertaining film. I wasn’t anywhere near prepared for such a stunning performance from Sienna Miller, I have rarely seen the performances other critics wax lyrical about finding Miller to be average in most things, and I wasn’t anywhere near ready for my heart strings to be tugged upon as they were here.

I cannot allow myself to get into the mindset of losing one of my children, just the thought of it makes my skin crawl and I was physically shaking throughout most of American Woman. There is other films that take this particular storyline seriously and they are all hard to watch for a parent but you are normally okay by the end of the film, aware that in your own reality your children are safe, that’s because the other films that handle this subject matter don’t have an Oscar worthy performance from Sienna Miller as the mother, a performance that gets right into your soul and forces you to take the journey with her. Miller throughout American Woman just impresses at every turn, from trailer park trash still trying to be young chasing married men at the start, to her touching conversation with her grandchild’s father Tyler (Alex Neustaedter in a career best performance) who she had blamed for her daughters disappearance for so long, to the level headed and loving Deb towards the end there isn’t a emotional beat, a physical expression, a line of dialogue out of place. 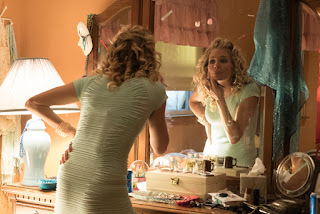 I haven’t said much about the plot or timeline of the film and that’s on purpose, if I start going down that road you are going to get spoilers galore and I risk you not seeking out American Woman for yourselves. Very rarely in modern cinema do you get such a perfect storm of film-making. The cast, right down the list, give career highlight performances. Aaron Paul, Christina Hendricks, Amy Madigan, and Will Sasso have never been better than they are in this. Aiden Fisk as Jesse will have a long and glorious career ahead of him with supporting performances this good. Ingelsby avoided every obvious trap in his screenplay, twisting expectations at every level and giving this glorious cast some real meaty scenes to shine in, the music is appropriate at every turn, the cinematography is perfect, there is one scene at a press conference near the beginning that with the camera angle taken twists the visual to have everybody fade into the background except for the distraught Deb and it is one of the most beautiful scenes I have watched in a long time despite the subject matter that puts you in that room to begin with, and Jake Scott has produced one of the most incredible feelings I have ever gotten from watching a film, playing out a large part of the final act in complete silence shaking to my core long before the reveal.

I don’t know if my opinion matters much in the grand scheme of things, but American Woman has set the bar for films to clear very highly. From a technical and performance standpoint American Woman is flawless, and Sienna Miller I now finally get, I now finally understand what my peers have been telling me for so many years. It's nearly October 2019 as I write this review and there is a whole lot of movies being released between now and the end of this decade but I am not sure many will knock American Woman off the top spot for film of the year and as contender for film of the last few years. Stunning and affecting cinema perfectly executed.