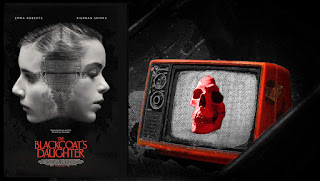 We love Halloween here at The DreamCage and we love the countdown to it even more as, every day in October, David Ames opens a window (well, writes an article) in his Hallow-vent Calendar of horror films. His choice for Day 11 of Hallow-vent is The Blackcoat's Daughter... 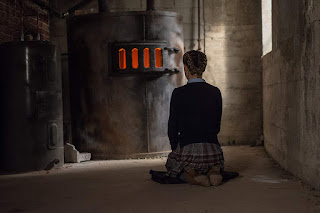 Today’s film is actually the first in the repertoire of director Osgood Perkins. While this film was released after his second effort, I Am the Pretty Thing that Lives in the House, it was actually written, shot, and produced before and here we are given an insight into how Perkins operates. While it had a low budget and didn’t receive a massive return on investment, this film deserves to be lauded as much, if not more than his more famous work. Today we look at Osgood Perkins’ 2015 debut The Blackcoat’s Daughter (known in the UK as February).

This film is told out of order and so as we progress through the review, I will try to maintain some of that storytelling so as not to reveal anything important about the plot. This film opens following two girls, Rose and Katherine, who attend a prestigious Catholic boarding school. Rose is worried that she may be pregnant and so, on the day parents are supposed to come and pick up the students for a week-long break, Rose lies to hers to buy herself some time to think. At the same time, Katherine’s parents are a no show, which is very worrisome for her.

Later that evening Katherine sneaks out to see her boyfriend. When she returns, she stumbles upon Katherine in the basement, bowing repeatedly to the lit boiler. Rose is noticeably shaken.

At the same time, miles away, we meet Joan, a young woman who appears to have just gotten out of the hospital. While waiting at a bus station, a kind man named Bill and his wife, Linda, offer Joan a ride. They take care of her, offering to put her up for the night and to feed her as well. Bill says that Joan reminds her of his late daughter.

This is all I want to reveal about the plot of the film. If you are a fan of slow-burn horror with an interesting payoff, The Blackcoat’s Daughter is definitely one you should check out. It is subtle and understated in all of the best ways so that when the horror elements enter into the film, they are even more jarring. The score, composed by Perkins’ brother, Elvis Perkins, is wonderfully ambient and adds so much to every scene.

Perkins does not shy away from empty space and silence in this film, something that is a welcome quality in a world of scream queens and jump scares. The horror here is intermixed with a somberness and sadness that permeates the entire film. It is beautifully written and shot, and I feel like Perkins has actually accomplished something wonderfully understated with this film. The blood, though miniscule, is incredibly effective because it is used so well.

Performance-wise everyone is great. Emma Roberts has a strange brooding quality that offers up numerous readings, whether we see her as a victim, an aggressor, a seducer, or even a demon. Roberts ability to portray complex characters continues to grow with each film and I am always happy with her performances. Lucy Boynton is convincing as Rose, although somewhat two-dimensional, and she takes us from curious to worried very quickly.

Lauren Holly and James Remar have miniscule roles in the film but play the grieving couple very well. Remar is the optimistic father, still chasing after the memory of his daughter, but forever positive. In stark contrast, Holly is bitter and chastising toward everyone. We can feel the vitriol and hurt pouring forth from her as she has never fully come to terms with the death of her daughter.

Lastly, and most importantly is Kiernan Shipka’s portrayal of Katherine. She is perfectly complex, and shifts between emotion and blank expression so fast as to be downright terrifying in and of itself. If I had to connect her to another character, she reminds me of any number of female characters from Higurashi, an anime where the characters shift on a dime, which creates an unsettling moment. THIS is exactly what Shipka is able to convey.

This film deserves to be viewed. I know that it has generally positive reviews but nothing I have seen has done this film justice. It is so well-made and so haunting at certain points that the unsettling aspects tower over the emotional impact that is also present. You need to watch this film and experience the same slow-burn horror magnificence that I have now been privy to.

Find The Blackcoat's Daughter on Netflix in the US