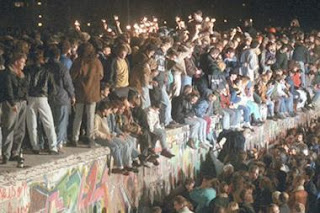 To mark the 30th anniversary of the fall of the Berlin Wall, BBC Four has announced four new films that address and discuss the surrounding circumstances that led to the end of the Cold War and the fall of the wall...

The films will be broadcast around the 30th anniversary of the Fall of the Berlin Wall and include a trio from BBC Arts, Rich Hall’s Red Menace, London Calling: Cold War Letters and A British Guide To The End Of The World alongside Reporting History: The Fall Of The Berlin Wall with John Simpson from BBC Factual.

In the 90 minute documentary Rich Hall’s Red Menace, Rich embarks on an examination of the relationship between the West and the East, America and the Union of Soviet Socialist Republics. In his unique way, weaving bizarre, extraordinary and untold stories through the narrative, he looks at the Cold War from an American perspective and delves into the psyche of those living in the Soviet Union; those who took part in the machinations, the plots and the conspiracies and the ordinary citizens who, like Rich lived through this most tense of times. The Cold War, Americas obsession with Communism and the Soviet Union isn’t just about the race to produce the atom bomb and the conquest of space. It’s about spying, political scheming, fear from Communism in Hollywood, in literature and on television.

The hour long Reporting History: The Fall of the Berlin Wall sees John Simpson, the BBC’s world affairs editor, go back in time to examine his reports on one of the most defining moments of the 20th century on the 30th anniversary of the fall of the Berlin Wall. On 9 November 1989, as the Berlin Wall’s check points opened up, Simpson rushed to Berlin to cover this incredible event which he thought, like many others, would change the world for the better. Three decades on, Simpson wonders if he was wrong to be so optimistic and talks with historians and other experts to try and understand just how accurate his reporting was. He’ll examine why the Cold War battle that built the Berlin Wall was replaced with other destabilising global power-struggles, why he didn’t predict that the pace of change across Europe would lead to the terrible war in Yugoslavia, and why Russia would find a new guise in which to become a bitter enemy to the West. At the heart of the film is an intense and personal interview where he describes how he grew up in the shadow of the Cold War power battle between the capitalist West and the communist East and how he never thought the Berlin Wall would fall in his lifetime. He believed, like everybody else, this global stand-off would continue for many more decades, ending sooner or later in nuclear war.


London Calling: Cold War Letters is the story of the BBC's World service broadcast Letters Without Signature which between 1955 and 1975 broadcast letters which gave voice to the silenced people of East Germany by inviting them to secretly write in to a radio programme. On the 30th anniversary of the fall of the Berlin Wall, this hour long film explores an unknown story of the Cold War. The film looks at the impact of the programme on both the letter writers in East Germany - who faced jail if discovered - and the producers of the show in London, particularly on its mysterious presenter, Austin Harrison. Using never before seen Stasi files and recordings, the film documents the tit for tat propaganda war between the Stasi and BBC. It reveals a fascinating world of spies, secret state subterfuge and individual acts of bravery.

A British Guide To The End Of The World presents a chilling, chaotic and crazed account of Britain as it prepared itself for nuclear attack during the Cold War. Framed by Britain’s mission to have its own nuclear force, the film uses extraordinary unseen archive and exclusive testimonies from people directly involved in and affected by these nuclear ambitions - including former British soldiers who feel they were used as guinea pigs during early nuclear tests carried out in Christmas Island in the South Pacific. Determined to maintain its status as a great power and reaffirm its place as the world’s third nuclear power, Britain began Operation Grapple - a series of British thermonuclear bomb tests that took place in the south Pacific islands between 1957-1958. The film has unique access to footage from ex military personnel who filmed their arrival on Christmas Island to carry out these tests. The men were mostly conscripted national servicemen who believed they had arrived in paradise... until they had to sign the Official Secrets Act ahead of witnessing the live detonation of Britain’s nuclear bomb. Having joined the US and the Soviet Union at the nuclear table, Britain was then left with a problem - how should she prepare her people for the potential end of the world? From classified footage, hidden for decades, the film then reveals Britain’s planning for a devastating event that thankfully never happened. Encased in typically British dark humour and punctuated by moments of poignancy, the archive reveals a time when paranoia was stockpiled, leaving a generation traumatised.

Cassian Harrison, Channel Editor, BBC Four, said, “Only BBC Four would approach such an important date with such a distinctive, eclectic and unexpectedly entertaining range of content. From Rich Hall’s brilliantly dyspeptic take on the absurdities of mutually assured destruction to shocking footage of the UK’s desperate attempts to prepare for Armageddon, BBC Four’s Cold War season will offer a singular perspective on an extraordinary era."