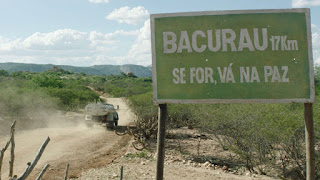 Ren Zelen headed for Brazil, on screen at least, as she watched Bacurau at the London Film Festival...

The story centres around Bacurau, a tiny village deep in the Brazilian backwoods of north-eastern Sertão. Returning home for her grandmother’s funeral, a young woman called Teresa (Bárbara Colen) has obtained a ride from a man who delivers drinking water in a giant tanker.

The water is being surreptitiously transported in the tanker because the people of Bacurau have had their supply cut off after an acrimonious dispute with regional authorities, headed by dodgy local politician Tony Jr (Thardelly Lima).

On arrival, a small, round, homemade pill is placed reverently on her tongue, a practice which appears to be a local tradition. Traditions are intensely important as is testified by this tiny place having its own museum of Bacurau history, a building more esteemed than the church. The museum is an integral part of the village’s mysterious past and, as it turns out, its future too.

Nevertheless, the town is not unacquainted with the modern world. Teresa has brought new pharmaceuticals and vaccines to her remote homeplace for the doctor, Domingas, (played by the veteran Brazilian star Sônia Braga). The local elder and teacher Plinio (Wilson Rabelo) uses iPads and computers when educating the town’s children in his own particular practical way.

Teresa enters into a relationship with Pacote (Thomas Aquino), a semi-reformed gangster and vigilante with a connection to a celebrated local outlaw called Lunga (Silvero Pereira) whose gang is hiding from the authorities somewhere in the backwoods.

During one of his lessons, teacher Plinio fails to find Bacurau on a google map, and then even on a satellite picture on the class computer screen. Even though their old-fashioned maps clearly show Bacurau, they can no longer find it on any GPS system, so the townspeople begin to speculate why they are being erased. 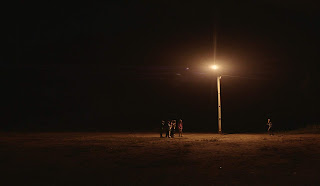 The mystery deepens as some of their tradesmen and locals are followed and spied upon by strange drones which amusingly resemble flying saucers from Sci-fi B movies of the 1950s and after some motorcycling strangers pass through town the locals find that their mobile phones no longer work and they are cut off from communications.

When we hear the drones are communicating back to ‘base’ in English and not Portuguese, and we learn that a pack of wealthy American tourists have holed up in a hunting lodge near Bacurau, armed to the teeth and on some kind of safari package - something rather ominous is clearly afoot. Then, when the unexplained murder of a nearby farming family is discovered and Udo Kier makes an appearance, we just know things are not going to go well.

One begins to wonder what resource Brazil might have that would encourage this kind of tourism? What kind of secret commercial transaction would put money into the country’s coffers with the cooperation and approval of the political establishment?

However, the tightly knit community of Bacurau is already familiar with a disturbing outside world. The film is deceptively set in a near future where the whole of the village, adults and children alike, can gather to watch the exploits of their local gangsters on YouTube and executions of convicted criminals in São Paulo are broadcast live on TV.

What safari leader Michael (the aforementioned Udo Kier) and his trigger-happy tourist clients don’t take into consideration, is that there is a cultural history of banditry in Bacurau, fuelled by rebellion against oppression and the regular use of local psychotropic drugs!

The near-future setting perhaps gives this film a license to be vaguely fantastical, but equally, director Filho has interestingly meshed together several themes and influences. His film obviously pays homage to the Western and to the Brazilian ‘cangaço’ bandit movies of the 50s and 60s. It begins as a realistic anthropological examination of a close community of unusual characters, becomes an increasingly sinister political parable and finally ends as something resembling a gruesome Jacobean bloodbath.

Bacurau is a project which had been gestating since 2009, but despite a decade in development, it may be seen as a surprisingly timely commentary on the direction the country is taking in the Bolsonaro era, highlighting the economic colonisation of Brazil and of American cultural dominance.

On the other hand, director Filho may perhaps simply be indicating that it might be a mistake to think that his country, with its strong traditions and bloody heritage, might be too easily subdued and governed.