Film - Color Out of Space 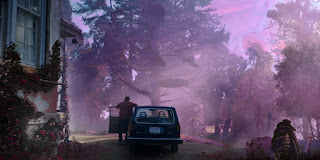 Ren Zelen watched Color Out of Space at London Film Festival, but was it cosmic or merely pie in the sky...

According to aficionados of H.P Lovecraft, his macabre cosmic tales are notoriously difficult to adapt into film. The challenge of adapting Lovecraft’s personal favourite, The Color Out of Space, has brought director Richard Stanley back into the cinematic fray, this film being his first narrative feature since 1992.

In a Q&A after the screening director Stanley explained that one hindrance to successful adaptation was that Lovecraft, being a notorious misanthrope, wasn’t particularly interested in filling-out the characters that populate his stories. Stanley went on to indicate that he had tried to ‘humanize’ Lovecraft’s original tale by making the fate of the Gardner family central to the film. 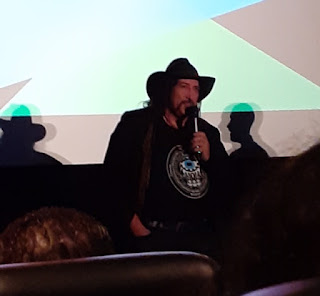 The plot concerns mediocre artist Nathan Gardner (Nicholas Cage) who has moved his family out of the big city and into the Massachusetts countryside, close to Arkham, (a fictional town featuring in Lovecraft’s stories).

Nathan and his wife Theresa (Joely Richardson) have renovated his father’s old farmhouse and are now living the dream – he has opted to grow produce and raise alpacas - not for their fur, which would be the logical thing to do, but instead for their milk and meat, which even his children find somewhat eccentric.

Meanwhile Theresa, recovering from a breast cancer operation, brings in much of their income by working as an online commodities trader, but struggles to keep in touch with her clients as the house has an unreliable internet connection.

Their children are individually adjusting to rural life. Teen son Benny (Brendan Meyer) retreats to the barn which houses the alpacas to smoke pot, while daughter Lavinia (Madeleine Arthur) exhibits a rebellious streak but has nevertheless succumbed to the family’s hippy mentality by practicing Wiccan rituals. Completing the family is little Jack (Julian Hilliard, seen recently in The Haunting of Hill House).

Lavinia, in full Wiccan regalia complete with white horse, is performing a river rite geared to rid her mother of any further vestiges of cancer, when she’s interrupted by Ward (Elliot Knight), a handsome young hydrologist surveying the water levels in the area for a future dam project.

She takes him back to meet her family where dad Nathan helpfully shows him around the grounds where, despite the family’s idiosyncrasies, all seems to be going well.

During the night however, eerie lights are seen in the sky and with a tremendous earth-shaking crash, a steaming, glowing, red-hot ball smashes down near the water well in the garden. The family are shaken by the startling event but are distracted by little Jack who seems to be suffering from some kind of catatonic shock. 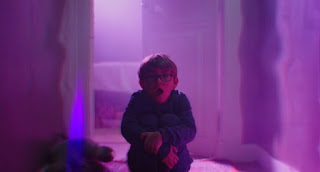 By morning Jack has recovered, and the smouldering space-sphere has cooled to ash. When Ward comes by he assumes that the rock must have been a meteorite strike. By the time Arkham’s sheriff, the mayor (Q’orianka Kilcher) and the TV cameras arrive the thing has disappeared altogether and all that is left is a dust-filled hole in the ground.

Hydrologist Ward identifies that the local water seems to be contaminated and wisely declines from drinking it. Unfortunately, the Gardners, their pets and their livestock have been dedicated well-water drinkers.

A series of random occurrences begin to escalate - little Jack starts talking to an invisible friend who lives in the well, the old hippie hermit Ezra (Tommy Chong), who lives a self-sufficient life in a nearby forest shack, asserts that something under the earth is altering the local ecology.

Certainly, something seems to have gone awry with nature - there are flash lightning storms, the internet, TV, phone and radios signals go haywire, and everywhere near the Gardner’s house flowers and creepers sprout up in unnatural bright fuchsia or pink pastel colours. Nathan’s crops of fruit and tomatoes grow large and ripen early, but taste horrible, and the water looks increasingly murky.

Hermit Ezra’s cat and the Gardner’s family dog go missing and the valuable herd of alpacas starts to change. We feel apprehensive when Nathan decides to have a shower and sure enough, he then discovers that his skin is turning scaly. The human residents begin to behave in increasingly erratic ways and experience distorting effects on time and matter. Gradually, each member of the family falls prey to the grimly altering effects of ‘the color’.

Lovecraft’s literary depiction of ‘the color’ described it as one outside the human visual spectrum, so it was a challenge for Director of Photography Steve Annis to portray a colour that is both ominous and abnormal. He opts for shades of pink, fuchsia and violet swirling in a pastel fog that permeates the screen in varying degrees.

The creepy effect is enhanced by Colin Stetson’s score, by turns humming and vibrating or blastingly loud, geared to create discomfort and jangle the nerves. All of this works to create a sensory overload which is probably exactly the sort of nebulously nightmarish ambience that Lovecraft would have wanted.

Most of the comic relief comes unsurprisingly, from Nic Cage, who can veer from concerned dad to wildly hysterical loon in seconds. As the toxicity of ‘the color’ drives everyone crazy, it’s Cage’s Nathan who definitely goes the craziest. (In the Q&A director Stanley indicated that he’d had to cut some of Cage’s most outrageous improvisations out of the film).

Amusingly, the Gardner kids comment at one point how dad appears to be acting ‘a bit weird’ and Cage does sometimes seem to be acting in a completely different movie to the rest of the cast.

Though clearly updated for a modern audience, Stanley’s film adaptation of The Color Out of Space manages to remain faithful to the spirit and intent of Lovecraft’s original tale, a classic of the sci-fi/horror genre.