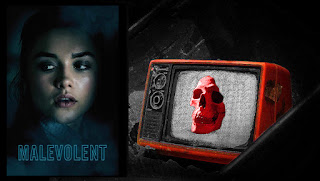 We love Halloween here at The DreamCage and we love the countdown to it even more as, every day in October, David Ames opens a window (well, writes an article) in his Hallow-vent Calendar of horror films. His choice for Day 16 of Hallow-vent is Malevolent...

I love haunted house movies. There are few things that can be so unassuming yet so terrifying as an older house that creaks and cracks, and may contain some strange connection to the underworld. Ghost stories are fun, but haunted house stories add an element of time and place, as well as a connection to something more concrete than just spirits. Also, haunted house stories work on that level of relatability; how many of us have thought at one time or another that the houses we live in currently, or especially the houses we grew up in, were actually haunted? Today, we look at a unique haunted house film, one that takes turns which veer off into the serial killer genre as well. Today, we look at 2018’s Malevolent.

Angela and her brother, Jackson, are American siblings living in Scotland in the mid-1980s. Their mother was a famous medium and so, after her death, Jackson and Angela take up the mantle. The only catch is that their entire operation is a scam used to swindle people looking for closure out of their money. Together with their friend Eliot, and Jackson’s girlfriend Beth, the foursome travels the Scottish country “curing” homes of their hauntings in exchange for money. Without his sister’s knowledge, Jackson is also deep into debt with a loan shark and so these cleansings are the only think keeping him safe from being killed.

After a strange case, Angela begins to see and hear things which no one else can, including the supposedly fake ghosts which they are supposed to be exorcising from homes. Every time she experiences a real event, her nose begins to bleed, and she is terrified. Therefore, after receiving a call from a Mrs. Green about cleansing her house, Angela turns down the request, understanding that she needs a break to sort out what is happening to her.

When she is out, Jackson fields a call from Mrs. Green and, in desperate need of money, agrees to the job. After convincing Angela and the rest of the group that they can make twice their normal rate, they foursome heads out to rural Scotland and to an old estate. Mrs. Green shows Angela pictures of the girls, her three nieces, who were murdered in the home. She has called the siblings to her house in hopes that she can “stop the girls screaming.”

The group begins as they normally do, but after Angela sees one of the girls and follows her into an abandoned wing of the house, Eliot falls through the floor and shatters his ankle. Jackson, who is so frustrated about the turn of events, comes to the rescue, and while in the basement, he and Angela discover that this is where to girls were kept. They get Eliot out of the hole and Jackson heads to find Mrs. Green who informs him that he has failed. She also suspects that he was lying and the entire thing was a sham. In tears she tells him that the girls died and it was their own fault. Jackson has heard enough and tries to locate Beth, but she has gone missing.

This is all you are going to get for plot today. Suffice it to say, after reading some surface-level reviews, and looking over Rotten Tomatoes, I was worried that this would be another shitshow. I was pleasantly surprised by the quality of the film. Olaf de Fleur, a director I was not aware of before this movie, has an eye for the subtle aspects of specter horror. He also does a wonderful job of showing us some of the violence, but leaving quite a bit just off screen. It gives the mind a chance to develop its own ideas and it is welcomed in this sort of slow-burn horror film.

Florence Pugh, recently of Midsommar fame, is wonderful here as well. She plays the disturbed perfectly, and isn’t afraid to cry and take chances with her acting. She was one of the bright spots of the film, and even when she is scamming people, we are able to see her trepidation about it. She is an innately sensitive soul and Pugh pulls off that character splendidly.

Ben Lloyd-Hughes takes a different route with Jackson, coming across as a nigh irredeemable douche who only seems to care about himself until about halfway through the film. He is good at playing the snakeoil salesman of the group, but when he realizes what is happening, Lloyd-Hughes is able to help transform that character into someone we actually want to live.

Lastly, Celia Imrie is a delight to watch, as the strangely malevolent (see what I did there?) Mrs. Green. She starts as a sweet, if not troubled, older woman, but that façade disappears quickly. She transforms first into a heartbroken woman who is shrewd and uncaring. Lastly, she takes a turn toward the psychotic, and while her performance may have been, at times, incredibly over-the-top, she is still convincing and genuinely unsettling.

As I said before, I was skeptical of this film, almost to the point of trading it out for something else, but I was so drawn to the haunted house aspect, as well as Pugh (after her performance in Midsommar) that I had to see this. I am so glad that I took the time. This movie isn’t perfect. In fact, there is quite a lot to trouble a viewer, from over-the-top performances to glaring plot holes, but all that is wiped away in the interesting storyline (although that could have also used a second pass from a writer) and the direction. Check this one out now. It doesn’t do anything brand new and it won’t make the list of the greatest horror of all time, but it is a decent addition to the genre and is so fun to watch.