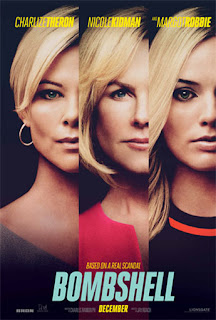 Starring Charlize Theron, Nicole Kidman, Margot Robbie and John Lithgow, and based on real events, a new trailer has been released for Bombshell...

While the current (and excellent) Showtime TV drama mini-series The Loudest Voice (starring Russell Crowe and Sienna Miller) includes a look at the same sexual harassment scandal from the perspective of Fox News creator Roger Ailes, Bombshell promises to be "a revealing look inside the most powerful and controversial media empire of all time; Fox News, and the explosive story of the women who brought down the infamous man who created it."

Bombshell drops [see what we did there? - Ed] into cinemas in the UK on 24th January.