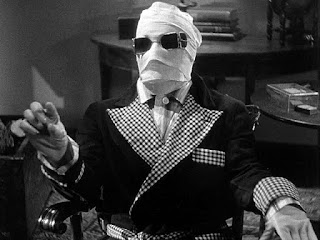 Daniel White dug through his vast horror film collection and is now rewatching a box set of classic monster movies from Universal. For his next Universal Monster of the Week, he watched the Invisible Man [or didn't - Ed]...

Throughout cinematic history there are examples of films that deal with the consequences with messing with 'the order of things'. From Jurassic Park to The Fly it is clear that scientists who push back against the barriers placed by nature normally end up either dead or wishing they were. Clearly some things are just not supposed to be meddled with and yet, when they are, it is so entertaining!

For the 1933 version of The Invisible Man the titular role was originally going to be played by Boris Karloff. However, Karloff's contractual fee proved too high for the films budget and so a replacement had to be found. It's these funny turns of fate that so often produce cinematic gold (it's hard to imagine that Jaws would have been the classic it turned out to be had they got the shark to work properly) Claude Rains is so perfect in the role that it's hard to imagine anyone else doing a more convincing job. In order to convince as a mad scientist you have to convey a high level of intelligence, almost fanatical obsession and a dark murderous side that threatens to bubble over at any moment. It isn't just a case of letting rip with a maniacal laugh every so often or staring wide eyed into space. Claude Rains achieves this in such a dramatic way that it is impossible to tear your eyes from where you can't see him. That's the other point, large amounts of his screen time are taken up with just hearing a disembodied voice and seeing objects move themselves or looking at Rains deliver his lines covered with his iconic bandages and dark glasses. 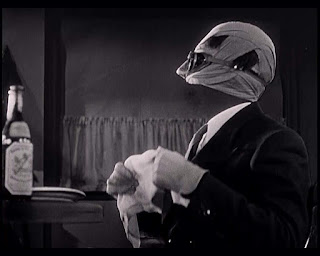 It's a really dark film as well, considering it was made in 1933, as we see Dr Griffin murdering his way through a police force and derailing a train causing hundreds of deaths. Rains' spoken voice is deeply unnerving, menacing and softly spoken to deranged in one easy leap. As with previous Universal Monster films, The Invisible Man works very effectively in black and white and the creepy menace is accentuated by the wonderful score composed by Heinz Roemheld. Rains is also supported by a fantastic support cast which add to the believability of the horror caused by his behaviour. There is real tenderness between Griffin and his girlfriend Flora Cranley (Gloria Stuart) and Griffin's colleague, Kemp, deserved an awful lot more than being chucked over a cliff in car.

The special effects were groundbreaking at the time, using wires but also a black velvet suit against a black background. Seems fairly old hat now but at the time it astounded audiences that Rains couldn't be seen and the closing scenes as he attempts to make his escape, only to be given away by his footprints in the snow, were jaw dropping. It is hard to feel any sympathy for a scientist that wants to take over the world and has killed hundreds and yet as Griffin dies his final words show that he realises his mistake. If only he had watched a few films it may have saved him and everyone else a huge amount of pain.

"I meddled in things that man must leave alone"

Watching The Invisible Man again, after quite a few years, has made me realise just how big the debt that our modern horror films owe them. Were it not for films like Frankenstein, Dracula and The Invisible Man we would not have such a wonderful and well populated horror genre today. The Invisible Man is an incredible horror film that has lasted over 80 years and is still has gripping and as effective today. There have been a few attempts, over the years, to remake the story but few, if any, have come close to Claude Rains stellar performance.