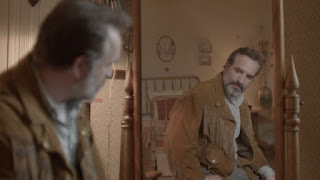 On at London Film Festival next week, Ren Zelen puts on her coat to watch Deerskin...

Written and directed by Quentin Dupieux, Deerskin is a black, not to say bleak, comedy about obsession, here concerning a man who develops an inexplicable and unhealthy mania regarding a second-hand deerskin jacket.

The versatile Jean Dujardin - the suave, dapper lead in the silent musical comedy, The Artist - plays a character about as far removed from that particular role as is possible. Here he plays Georges, an inept loser and liar who travels miles into the remote mountains of France simply to view a second-hand jacket he has seen advertised for sale.

When he tries the jacket on he is immediately smitten by his own reflection, "Killer style," he whispers to himself, even though it clearly isn’t. The jacket is a 1980s dated, ill-fitting, fringed, tan-suede creation, and the fact that Georges thinks he looks great is the first indication that he might not be entirely rational. The jacket is too short for his large frame and looks ridiculously out of place with his business shirt and trousers.

Georges however, is ecstatic, and pays well over the odds, handing over most of his cash for the jacket which he is told is 100 percent deerskin. The seller can’t believe his luck, disposing of his rather outmoded specimen for a princely sum, so he gifts George with an old model camcorder as an ‘extra bonus’.

Instead of returning home, Georges continues on to an isolated guest house where he checks in for an indefinite period. He tells the desk clerk that his credit card isn’t working and he’s spent his cash on the jacket so he agrees to leave his wedding ring as collateral until he can pay. The mountain hotel Georges seeks out certainly hasn’t had a refit for thirty years and its creaking fixtures and drab décor are the perfect setting for Georges and his jacket. It transpires that we might be in the present, but Georges has got stuck somewhere in the past. He talks about fax machines, has no concept of computers and ditches his mobile phone.

It transpires that his wife has thrown him out that he’s been blocked from his bank account, which throws him into the first of many rages. It seems like Georges’s life has gone off the rails and he may be playing out some existential masculine midlife crisis.

He finds consolation in his jacket and takes some pleasure in filming himself posing in it with the ‘bonus’ camcorder. When he gets into conversation with the waitress and sole occupant of the empty local bar they ask him what he does for a living. Stuck for an answer he pretends that he’s a filmmaker, after all, he has a camera. 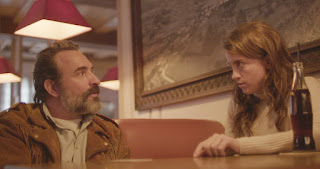 The bartender’s name is Denise (Adèle Haenel) and as chance would have it, she wants to be a film editor. She has practiced the art on her own computer by re-editing Tarantino’s Pulp Fiction, which she chose to put into chronological order - “It sucked!” she declares.

Georges offers her the job of editing the footage he is currently shooting, if she could only see her way to forwarding him some finance - he insists that his ‘producers and film crew can’t send him further money for the production as they are stranded filming on a glacier in Siberia’.

Sceptical at first, Denise is convinced when he hands her all his footage. Unsurprisingly, she thinks Georges must be making a weird, avant-garde satire and cleans out her account to bankroll the film, despite his frequent slip-ups regarding the filmmaking and editing process.

However, the jacket increases its hold on Georges as a fetish object and it isn’t long before it develops a personality of its own and begins to converse with him. They are made for each other, it seems, and they share the same dream – the jacket confesses its desire to be the only such garment in the world and Georges is equally keen to become the only person entitled to wear such a garment and to display its “killer style”.

As they say, ‘clothes maketh the man’ and the more clothed in deerskin Georges becomes, the more determined he is to create film for Denise to edit and to escalate his mission to rid the world of jackets and their wearers by any means necessary – he has to be the only one to fully embody that ‘killer style’.

Writer/director Dupieux seems to enjoy creating ridiculous situations where characters go to extreme lengths (see his previous outings Rubber and Wrong) and Deerskin certainly falls into the same category. Deerskin is a skewed fable with one joke which serves as a parallel between Georges's maniacal jacket obsession and the ego and the single-minded vision which it takes to become a filmmaker.

Dupieux manages to sustain unpredictability throughout the snappy run time of only 77 minutes. Dupieux is aided by the performance of his leading actors, Dujardin and Haenel who lead us through a series of improbable developments with a conviction so deranged it’s even amusing when it shouldn’t be.