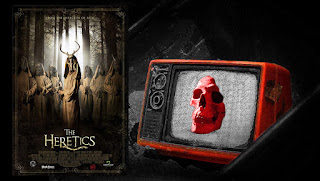 We love Halloween here at The DreamCage and we love the countdown to it even more as, every day in October, David Ames opens a window (well, writes an article) in his Hallow-vent Calendar of horror films. His choice for Day 3 of Hallow-vent is The Heretics... 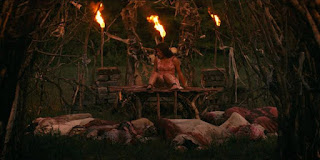 Today’s film was one that I wanted to watch the moment I saw the cover come onto my Netflix screen. It had a very occultish look and seemed to suggest that there would be some strange cult-like activity—something I am always for in a horror movie. I wasn’t let down, at least not by the premise. Today’s film is 2017’s The Heretics.

The Heretics follows Gloria (Nina Kiri), a young girl who is kidnapped by a cult and witnesses them all commit suicide before escaping the woods, covered in their blood. The film then flash-forwards five years to where Gloria is living with her mother. She is going to group therapy for survivors of abuse (I think—it isn’t really well-defined) and working in a church soup kitchen, helping the homeless. She is still haunted by nightmares based on her experience. The only thing that seems to make her happy is her girlfriend, Joan(Jorja Cadence).

One night, after spending time with Joan, a mysterious man kidnaps Gloria again, chloroforming her, and forcing her into his RV before driving her to a cabin in the middle of the woods. Here he chains her to a wall. She is convinced that he is a part of the cult who has come back to finish the ritual, but Thomas (Ry Barrett) assures her that he was once a part of the cult but has since left it because he couldn’t bring himself to kill her. He is trying to save her now as the ritual was waiting for this particular night for Gloria to bring a demon, Abaddon, into the world.

I don’t want to give anything else away but know that there is some awesome transformation scenes, music, makeup, and filming that you can treat yourself to if you tune into this film. For about the first twenty minutes, I wasn’t sure if I was watching a horror movie or an old PG-13 Cinemax film, but once the story started to actually develop, I was very impressed. As the film progresses, it gets better and better, and ends with a wonderful transformation and final scene, even if it is easy to guess.

Nina Kiri is spectacular in this film. She does a wonderful job of portraying strength but especially helplessness. She could have a real future in horror if this film gets the credit it is due. The other two characters are good but Kiri smokes them all in terms of performance.

The imagery presented in the film is haunting. The cultish things we are presented with do their job well and are very unsettling. I am glad they chose this direction as the opening leaves a lot to desire.

The person who deserves the most credit is the makeup artist (artists) who put together this insane transformation that we are able to see over the course of the last forty minutes of film. While Kiri sells everything that is happening to her, the makeup is what solidifies our belief in these events.

If you want something that is intense and stark and full of a few twists (clichéd as they are), The Heretics is for you. Please trust me when I say that you need to make it through the opening 20 minutes and you will not be disappointed. The ending saves this movie and the scenes at the climax of this film are spectacular.