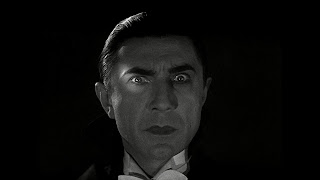 Daniel White dug through his vast horror film collection and is now rewatching a box set of classic monster movies from Universal. For his next Universal Monster of the Week, he looks back at Dracula...

I always try, when watching older films, to remember that they were made for a very different audience to nowadays. Equally the acting seems almost wooden and amateurish in comparison to the realism of today's releases. Whether because of the largely theatrical experience, which demanded a more larger than life emotional reaction, or because people just spoke better back then when watching films that date to the 1930's/40's I start finding the 'proper' way of delivering lines gives the films a very special sort of atmosphere.

Dracula was released in 1931 and, based on the stage play first performed in 1924, its theatrical origins are evident with the minimal special effects employed (fog, lighting and a fairly unrealistic bat) Dracula's transformation to and from bat are always executed off screen. The film was also completed on an exceptionally small budget ($355,000) and the film had no original score. The opening credits are bizarrely soundtracked with Tchaikovsky's Swan Lake whilst the closing credits are screened to Wagner's Die Meistersinger von Nurnberg. It wasn't until 1998 that Phillip Glass composed an original score for the film which added to the atmosphere of the original film.

For me, Dracula is about one man, one performance and, despite my deep love of Christopher Lee's portrayal in the Hammer productions, remains my favourite depiction of the undead Count. Bela Lugosi's powerful and controlled performance embodies everything I believe Dracula should be. Not of this world and yet strangely hypnotic to audiences as well as his victims. By focusing on character portrayal rather than effect it is Lugosi that makes the film work. The use of silence and lingering shots focused on Lugosi are eerie and completely bewitching. It is almost as if the control that Dracula has over his victims spills from the screen to the audience. Never is this more obvious than when the focus is placed on Lugosi's piercing eyes, I almost find myself flinching and yet I am unable to look away! Lugosi is the master of the Dracula cape swish and I have never seen it deployed so menacingly before or since. His battle with Van Helsing is more verbal but it is perhaps the over confidence of Dracula that proves his undoing in this case. There is no final denouement and, although I love Peter Cushing's portrayal of a more physical Van Helsing, a battle of wits really is just as effective within this version of Dracula. It's all about the atmosphere and the long shot of Dracula with his three vampire ladies is one of the most iconic shots in cinematic history. 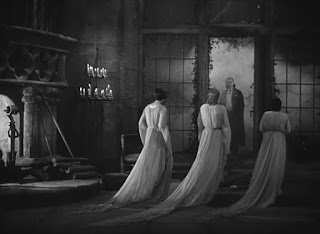 From the eerily unsettling opening scenes where Renfield arrives at the local village in Transylvania and ignoring the locals warnings about "the castle" (why does everyone do that?) to the final 'Dracula is dead forever' ending, the entire film is a revelation. Considering we all know the story and there is little in the way of surprises it is amazing that everything that is portrayed sort of feels new. No one quite does the Big D like Lugosi and there is an authenticity to his onscreen presence that is missing in later films. If Christopher Lee's performance is focused on his horrific smile then Lugosi's is all in the eyes. He has an almost predatory, animalistic way about him and the way that he creeps towards Lucy's bed is positively horrifying. Mentioning Renfield earlier I am reminded that he is often left on the sidelines with Harker becoming the focus. Dwight Frye is astonishing in his performance of an intelligent man who has completely lost his mind and his will to Dracula. His mad eyed lunacy when coupled with the most insane of laughs makes this performance fly head and shoulders over any other. I actually feel sorry for him when he is thrown down the steps at the end of the film.

Special mention must go to the worst cockney accent ever. Renfield's Sanitorium guard isn't even worthy of Dick Van Dyke levels of awfulness. It's not "Crizy" its "crazy" It's Lugosi's film though and it is unbelievable that he had to lobby the studios to get the role, no one else could carry this film in the way that he achieves. "The children of the night, what music they make" has never been said with such conviction or belief!