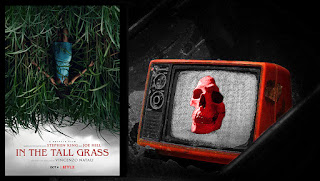 We love Halloween here at The DreamCage and we love the countdown to it even more as, every day in October, David Ames opens a window (well, writes an article) in his Hallow-vent Calendar of horror films. His choice for Day 18 of Hallow-vent is In The Tall Grass... 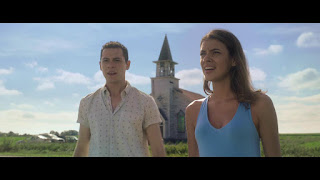 
There are few writers who inspire almost supreme confidence from the horror fandom. Stephen King is one of those writers, and in recent years his son, Joe Hill, has also started to produce stellar work. In fact, when it comes to short fiction, I think Hill has surpassed his father (20th Century Ghosts may be one of the finest collections I have ever read). That is why when I saw this film make an appearance on Netflix, I knew that I wanted to see it immediately. Today, we look at the adaptation of King and Hill’s novella of the same name, 2019’s In the Tall Grass.

Siblings Cal and Becky are travelling west to San Diego, leaving behind their family and Becky’s deadbeat boyfriend, Travis. Becky, who is now 6 months pregnant, has found a family in California that wants to adopt her child, something she desperately needs as Travis has abandoned her, citing that he isn’t ready to be a father. While making an emergency pit stop so Becky can take care of her morning sickness, the pair hear a young boy screaming for help from inside a large field of incredibly tall grass. While Cal parks the car in a nearby church lot, Becky makes her way to the edge of the field, and eventually the two head in to find the child and bring him to safety.

Immediately after entering the grass, they find that they have been separated. Thy call to one another, but after what seems like hours of searching, they still haven’t gotten any closer. In fact, at one point, the both simultaneously jump in hopes of spotting the other, realizing quickly that they are only a few yards apart. When they attempt the jump again, to solidify direction and distance, they are now much, much further apart.

That evening Cal runs into an incredibly filthy Tobin who is carrying a dead crow. He tells Cal that the grass won’t move something that is already dead, and he proceeds to bury the bird. He takes Cal to a giant rock and says that if he touches the monolith stone, he will be able to find Becky. Meanwhile, Becky encounters Ross, Tobin’s father, who takes her with him in order to find Cal and Tobin.

The next day, Travis shows up outside the church, searching for the siblings. He finds their car, which is covered with dirt. Inside is a half-eaten burger swarming with flies and maggots, indicating that the car has been there quite a while. Travis heads into the grass in search of Becky but instead stumbles across Tobin who shows him Becky’s rotting corpse. After this, Travis searches for a way out, but like everyone else in the tall grass, it seems an impossible task.

I don’t want to give anymore away because this film is quite the interesting piece. If you are a fan of Stephen King or Joe Hill, this is right up your alley. Unlike a lot of the films created from King’s work, this one really is effective. It feels very King throughout but ends in a way that feels much more like Hill.

Natali does a wonderful job of directing this. It is tense and dark, and he has an interesting eye for shots, especially when dealing with the surrounding tall grass. With Natali, it feels as though we truly are trapped. I especially love the overhead shots of people moving through the grass, as they look so miniscule in comparison with the massive field in which they are trapped. Those aerial shots add a real sense of isolation.

The music was great, utilizing traditional scores with strange tribal chanting that really added to the ambience of the film. The music isn’t overly used, and is, in fact, rather minimal, but when it appears in the movie, it is perfectly placed and truly builds and incredibly ominous atmosphere.

As for the performances, everyone in the movie is great. Laysla de Oliveira is truly the struggling mother, and her fear, not only for her brother and boyfriend, but also her unborn child, bleeds onto the screen so convincingly. Avery Whitted plays Cal perfectly, espousing worry and concern, but also a strange underlying attraction to his sister.

Harrison Gilbertson plays Travis with a wealth of sorrow, fear, and concern. When he grieves over Becky, we feel the pain. When he is concerned for Tobin, we experience that worry. When he attacks and ultimately saves people, we know his valor. Travis is a three-dimensional character for sure, but Gilbertson truly brings him to life. Another character with the same power is the young Will Buie Jr. who plays Tobin. This kid has some serious chops, and he is able to pull off the creepy kid vibe, but also the scared child, and even the strange prophet. He can do it all and he damn near steals the spotlight from everyone he is on screen with.

Lastly, but certainly not least, is the most high-level name in the film: Patrick Wilson. Now, I have yet to be disappointed by really anything he has been in and this is no exception. In a very Jack Nicholson way, Wilson goes from loving to concerned to maniacal overlord with such ease that the transformation is insanely convincing.

I know that this film won’t be for everyone. That being said, I think the critics and the online reviewers don’t give enough credit where credit is due. This film is beautifully shot, wonderfully acted, and handles the strange and weird in a unique and successful way. There may be some small issues with pacing or with trying to stretch the story a bit further than was necessary, but that should in no way deter you from watching this film. It was a great time.

Find In The Tall Grass on Netflix