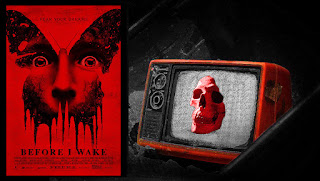 We love Halloween here at The DreamCage and we love the countdown to it even more as, every day in October, David Ames opens a window (well, writes an article) in his Hallow-vent Calendar of horror films. His choice for Day 19 of Hallow-vent is Before I Wake... 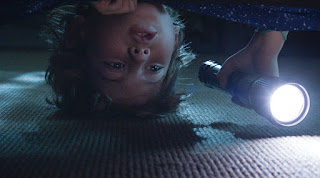 Sometimes you see a premise for a movie and you are instantly intrigued. You think to yourself, “There it is…this looks like it could be really good.” A lot of times, this doesn’t really pan out, and what started as a good idea ends up falling pretty far short of what the film could have been (looking at you Purge movies). Today’s film is a prime example of what happens when you take a great idea, throw in a couple of movie stars, and add a less than lacklustre script. Today, we are looking at 2016’s Before I Wake.

This film opens with a dishevelled man clutching a gun to himself and quietly apologising to a sleeping boy. Just as he begins to raise the gun, the bedroom door flies open and the man fires a shot aimlessly into the dark. The boy wakes up, and the man begins to apologise.

Then the film cuts to a couple, Jessie and Mark Hobson, who are being approved as foster parents. They suffered the tragic loss of their son, Sean, through an accidental drowning in their bathtub, and were unable to have another child. Therefore, they have decided to foster with the intent to adopt. The Child Services worker, Natalie, tells the couple that Cody is a special boy and will fit in perfectly.

The couple welcomes Cody into their home, and they discover that he is bright but slightly withdrawn. Both Jessie and Mark take immediately to the boy, and things seem to be looking up. Cody has a penchant for butterflies and one night, while he is sleeping, beautiful butterflies appear randomly in the Hobson home. After a discussion with Cody about who Sean was, that same night the Hobsons are greeted by the appearance of their dead son. Realising that whatever Cody dreams about is manifested in the real world, Jessie quickly becomes addicted, making sure to show Cody home videos of Sean so that she can even hear his voice.

This works out well for her, but Mark is unsure and feels as though they are manipulating and using Cody for selfish means, and that it needs to stop. Cody is also terrified of falling asleep and we soon learn of a creature he calls the Canker Man, a mummified looking bipedal monster who devours anyone it touches. How will the couple contend with this new menace when the mother is so intent on continuing to see her dead child?

I loved the initial premise of the film, but after about a half hour, the idea started to wane and eventually the film just felt kind of flat. The performances are okay, and it looks great, but the story just piddles away and the ending is less than impressive, leaving the audience wanting something much more substantial.

Kate Bosworth is convincing as the heartbroken but steadfast wife. We believe her descent into obsession, and her tears are incredibly moving. The only issue is that she jumps too quickly into being an unfit parent. This is by no fault of her own, as the script just takes leaps that don’t seem to pan out. I was especially excited to see Thomas Jane, who I love in basically everything, although I am not so sure about the choice to give him long hair. Jane is that quintessential movie dad. You know the one: the cool dad who likes video games, is a shoulder to cry on, and even playfully lies to mom just so that his new son can play hooky from school.

Lastly, Jacob Tremblay is pretty solid as Cody. He handles the strange, borderline creepy kid trope well, and avoids being a complete cliché. He is also very convincing when he is terrified or sad, and I was impressed with his portrayal of fear, especially when performing those scenes where his was just coming out of a dream.

Like I said before, the real villain in the movie is not the actual monster, but instead the script. The plot isn’t paced very well, and there are holes in the story that just don’t seem to add up. After assuming a bout of domestic violence with the father, who is missing, why would the police immediately uproot the child? Why would they, without any actual cause, consider the father a kidnapper of a previously missing student? Why would the Child Welfare agent not warn the new family about a string of missing people associated with their new ward, and then act angry and blame the new mother, even though entire families have gone missing while surrounding these kids? Why would the counsellor get angry and basically chuck pamphlets at a supposed domestic violence victim before telling her to get the hell out and never come back?

None of these plot points seem to align with the way the story flows and so they pull the viewer out. The film itself isn’t terrible, but the glaring issues in this movie cause some serious problems with suspension of belief. I didn’t hate Before I Wake, and I actually really liked the monster design and some of the elements as well as the initial idea, but there is just too much to contend with to call this thing a success.

Find Before I Wake on Netflix