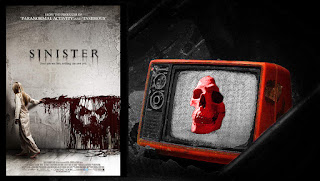 We love Halloween here at The DreamCage and we love the countdown to it even more as, every day in October, David Ames opens a window (well, writes an article) in his Hallow-vent Calendar of horror films. His choice for Day 29 of Hallow-vent is Sinister... 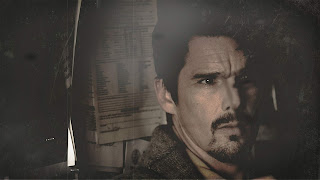 Sometimes we watch something and it doesn’t hit right with us. It could be that we had a bad day, or were tired, or our mind was influenced by someone else and so we don’t form our own opinion. Today’s film was one of those for me. When I first watched it, I actually hated it, and all of my friends, whose opinions I trust and value, were shocked that I wasn’t a big fan of this movie. Therefore, today, I wanted to give it another shot. I wanted to see if my initial impression of the film was hindered by some unseen force, so today I sat down to give another chance to the 2012 supernatural horror film Sinister.

The film follows the life of true crime writer Ellison Oswalt who, after hitting it big with a book years ago, has become irrelevant and unsuccessful. To help remedy the situation, he moves his family, Tracy, his wife, and Trevor and Ashley, his children, to a new place in hopes of finishing another best-selling book. This time he is investigating the grisly hanging of an entire family and the disappearance of their daughter. Unbeknownst to his wife, Ellison has purchased the very house where the family lived, and the backyard is where they were murdered.

While moving into the house and placing some boxes in the attic, Ellison stumbles across a box of old super 8 filmstrips which is labeled home movies. When he sits down to see what they are, he sees that the filmstrips are all shot by a mysterious party and follow different families, and each one ends with that family being murdered in a grizzly fashion. Among the tapes is the murder of the family by hanging, a family being burned alive, a family being drowned, a family having their throats slit, and a family being run over with a lawnmower.

Ellison contemplates calling the police but thinks better of it when his need to write a bestseller exceeds his conscience. Later that evening Ellison begins to hear strange things in the attic but when he investigates, he discovers Trevor suffering from severe night terrors. These dreams continue to get worse as the movie progresses. So do the strange sounds, and eventually after investigating the attic once again, Ellison falls through and injures his leg. When the police come to investigate, a deputy, who is also a huge fan of Ellison’s, offers to help with any research, while keeping it secret from the sheriff who is very unhappy about Ellison’s move to the city.

After discovering a strange symbol in the videos, and finding an unsettling masked figure in the background of each of the films, Ellison is put in touch with a professor, Jonas, who does some research and comes back with information on an old wives tale from Babylonian times detailing this creature named Bughuul who is believed to inspire carnage, especially in the minds of young children, and that he is even thought to take them to his realm. The supernatural elements continue to build until Ellsion and his family flee, but is he safe back at home?

So, I don’t know what was wrong with me on my first viewing because…DAMN, this movie was great. While I have some issues with the ending, and we will get there in a few, the pacing and the buildup are spectacular, and there are some genuinely scary and unsettling parts. By splicing in super 8 footage for the murder scenes, we feel as though we are watching old crime scene footage. It’s almost as if we should not be watching it, and that makes the film so much better.

All of the performances are great. I have always been a huge fan of Vincent D’Onofrio, and even though his role as Jonas is miniscule, he brings the proper clout to help make his revelations impactful. Juliet Rylance plays the worried wife/mother in very convincing fashion, and, like the Jonas role, while she may not have a ton of screen time, what she does with it helps to make a difference in the narrative. Both Clare Foley (Ashley) and Michael Hall D’Addario (Trevor) are great in their roles as the Oswalt children, with an especially unsettling scene of Trevor pouring himself upside-down, out of a moving box.

As for the role of Ellison, Ethan Hawke, as usual, knocks this out of the park. I love Ethan Hawke… I always have. He plays vulnerable and anxious better than almost anyone, and those emotions are most definitely needed in this film. He carries the movie on his back, and with little dialogue, he sells everything with facial features and body movement. Without Hawke’s performance, this film would have fallen flat.

The music was perfect and creepy. It had just the right amount of volume influx and weird repetitive noise so that whenever a scene was building to something, we are greeted with a jarring noise of some kind to add that element to the fear being established.

My only real issue with the film, and I can say that I felt the same way the first time I watched it, is that the movie feels like two-thirds of a work. I get the reason why they stopped when they did, but we are left at the end with more questions than answers. I know there is a sequel (I am watching that tomorrow) so maybe this will all make sense. Sadly, it felt like they were trying to achieve an Insidious-style film with an open-ended plot, but didn’t establish all the plotlines needed to make it work 100%.

In the end, I absolutely loved it and I am so glad that I gave this movie another chance. I will be watching the sequel, which I hope answers some of the questions that are left here, but overall, consider me, as my editor Susan states, educated.