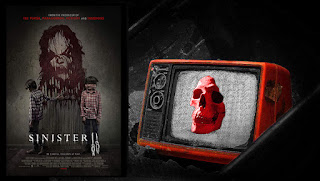 We love Halloween here at The DreamCage and we love the countdown to it even more as, every day in October, David Ames opens a window (well, writes an article) in his Hallow-vent Calendar of horror films. His choice for Day 30 of Hallow-vent is Sinister 2... 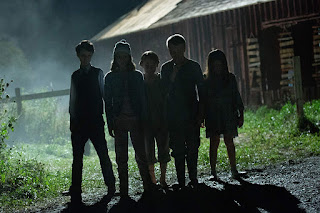 So after last night’s revelation that the original Sinister was actually a pretty decent horror flick, I saw that Netflix had the sequel. I thought, maybe they can continue the vibe and success of the first, and maybe we will get some answers for the unfulfilling parts of the original. Sadly, none of those things are true. Today, we look at the utter failure of 2015’s Sinister 2.

This film starts similarly to that of its predecessor, showing the grisly murder of a family who has been hung on crosses like scarecrows and set on fire. This turns out to be the nightmare of a child, Dylan, who is living in an old farmhouse with his mother, Courtney, and his brother, Zach. Dylan is nightly haunted by disturbing dreams of death, and is visited frequently by dead children, presumably those in the employ of Bughuul, the demon from the first Sinister. Each night the children take Dylan into the basement and force him to watch their films which depict the slaughter of each of their families.

Meanwhile, the Deputy from the first film reprises his role here, now no longer a member of the force, and he is in the process of tracking down the other cases of murder associated with the events of Sinister. He has found that by destroying the houses with fire, the chain is broken and Bughuul can’t continue his reign of terror. When the case leads him to the farmhouse where Dylan and his family are staying, the site of a brutal murder perpetrated for Bughuul, he becomes involved in not only trying to save the family from their abusive patriarchal figure, but also from being murdered by their son.

There isn’t much more I can write about the film as the plot is so threadbare, and relies so heavily and unsuccessfully on the previous film. The story feels so incredibly forced that any goodwill carried over from the first film is lost the moment the “ghost children” arrive.

The performances in the film are okay, and none of the actors aside from Lea Coco (who plays Clint, the abusive father and husband) feel over the top. In fact, James Ransone is surprisingly good in this film. He plays conflicted and scared very well, and we believe that he is doing what he feels is right, even if it puts him in harm’s way. Shannyn Sossaman is also very good as the concerned mother, constantly fighting to maintain custody of her children, all while dealing with the obviously declining mental health of one of her sons. Both of the boys, both Robert Danial Sloan and Dartanian Sloan, are good portrayals of the two sides to abuse: one very reticent to interact and afraid of confrontation, and the other violent and vengeful.

The real damage here is the script and concept, which takes the ideas presented in the first film and bastardizes them into a mediocre, forced attempt at scares. Where the first was subtle and slowly built the tension while giving us genuine scares along the way, the sequel tries far too hard with jump scares and an incredibly miniscule plotline that veers off the universe first established in the original.

The most egregious fault of the film comes with its portrayal of Bughuul. In the original, the image of this creature is met with an unsettling fear, a sense that he is always there and that he could destroy you if only he is given the chance. He is the main antagonist while getting so little screen time as to be both terrifying and mysterious. Sadly, this film takes that and turns it into a weird, Slipknot-inspired borderline slasher character in a suit who “punishes” the children when they don’t succeed. Sinister 2 does the same thing with Bughuul that The Strangers: Prey at Night did with the iconic masked man: they made him a ridiculous horror cliché, ruining the mystique and fear he creates.

I cannot recommend this film if you were a fan of the original. It is shot well, and it looks very polished, but unlike a lot of these Blumhouse Productions, this film feels more like a cash grab then a genuine attempt at a legitimate horror entry.