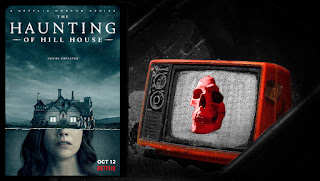 Happy Hallowe'en!! Every day in October, David Ames has opened a window (well, written an article) in his Hallow-vent Calendar of horror films to count down the days until today. His choice for the final day of Hallow-vent 2019 is The Haunting of Hill House... 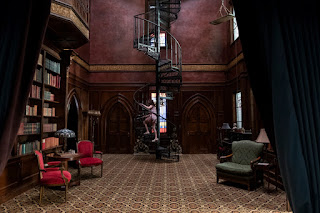 For a year now my best friend, Fox, has been encouraging (pushing incessantly would be a better description) for me to watch this series. I knew that it was going to be good, but with so much else to do, read, watch, and create, I never found the time. That is why, when this year’s Hallow-vent calendar came around, I knew I wanted the final review to be this series. Therefore, in the last two days I binged all 10 episodes of The Haunting of Hill House.

Let me start by saying that this review is never going to do this show justice. In over ten hours of footage, there is just too much story to reveal and to describe. Still, I feel it is necessary to describe how wonderfully constructed and produced this storyline is.

The Haunting of Hill House details the life and trials of the Crane family who, after moving into the old Hill House to film the property, begin to experience strange and disturbing phenomenon, until one evening, the father loads all of the children into a car and flees the property, leaving behind the house and the mother. When the father retuned, the mother had killed herself.

As adults, each child is dealing with seriously deep-seated emotional issues, all stemming from what happened to them when they were younger. Steve, the eldest, is an author and borderline alcoholic whose search for the truth, especially within his own family, has alienated him from his siblings and his wife. Shirley, the next in line, is a control freak. She is a mortician who deals with death by trying to “fix” it for her clients. Theodora is a strong woman, a child psychiatrist, whose clairvoyance causes her to also distance herself from any close relationships because she can’t stand to absorb anyone’s grief. Lastly, are the twins, Luke and Nell. Luke is a serious addict and Nell is a manic depressive girl.

The family has been scattered, and each refuses to truly revisit what happened to them as children, and what has continued to happen to them into adulthood. There is no relationship with their father, and their relationships with each other are strained at best. In order to succeed as a writer, Steve published the recollections of their childhood at the home and has become famous because of the tales of his siblings, although he doesn’t believe or remember anything strange.

One evening, after being ignored by both Steve and Shirley, Nell calls her father in a panic, telling him that she has begun to see one of her old ghosts again and that she understands now. The next morning, the family finds out that Nell returned to their childhood home and hanged herself. As the family begins to come together and grieve, the demons and hauntings worsen and the family must eventually deal with their issues and the issues of their childhood before it takes them to join their sister and mother. 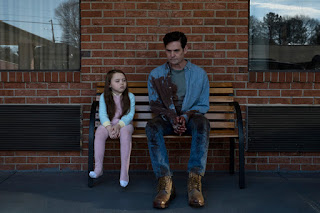 I don’t want to give anything else away because the story flows in such a way that things are revealed slowly and methodically. This show is damn near flawless, and the story and character development are pristine. This show has everything you need if you are a horror fan: it is scary and disturbing, haunting and emotional. The show mixes incredibly unsettling set pieces and creatures mixed with jump scares and genuine terror to deliver something I have never really seen before in a series.

The performances are too great to detail each individually, but I will say that the casting of the children and their adult counterparts is spot on. The children are all wonderful and put forth amazing performances to endear us to their struggles. Each of the adults also have their strengths and there is not one scene I can mention where something felt forced or overdone. This show has been handled with the utmost care to ensure that the integrity of what they’ve created remains intact.

Episode 5: The Bent Neck Lady is by far my favorite in the series. Victoria Pedretti is the perfect Nell, and her depth of character is best revealed in this episode. She is disturbed and haunted by the things she has seen, and continues to see, and she feels as though no one will listen. She feels she is alone. We get to watch her descent into that madness with wonder and when the cause is revealed, we are left both shocked and saddened.

One more impressive scene is from a minor character, Robert Longstreet, playing the caretaker Horace Dudley. He is speaking with the father about why he should get his wife out of the house, and the scene is a one-shot monologue describing the dangers of the house, the death of his first stillborn child, and his understanding of the depth of suffering Hugh could experience. His performance is spellbinding.

Another high point of the show is the incredible score created by the the Newton Brothers. The music is understated and beautiful at times, harsh and discordant at others. They understand exactly what each scene needs and deliver that emotion to every scene. It is as though the music is another character in the show.

I cannot recommend this show enough. It is not only the single best thing I watched this year-it may also be the best horror show ever created. This show is the definition of binge-worthy, and although there is a wondrous horror element present, the true heart of the show lies in the familial relationships and personal struggles of its characters. The show is so much deeper than what we see, a true study on the human psyche and the depth to which we all go when dealing with grief and trauma. The story looks at humanity through the lens of a haunted house, but the demons also serve as avatars for the personal demons of each character, the things they have to deal with before their lives can move on and they can finally grow as people.

Although there is a lot to unpack in this show, and the extended metaphor present is also perfectly executed, I would be remiss if I didn’t draw attention to the fact that above all else, this show is genuinely scary and unnerving, one major reason that it is such a success.

There is one word to describe this incredible piece of art: Perfection.

Find The Haunting of Hill House on Netflix