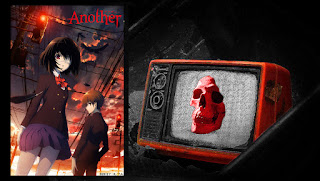 We love Halloween here at The DreamCage and we love the countdown to it even more as, every day in October, David Ames opens a window (well, writes an article) in his Hallow-vent Calendar of horror films. His choice for Day 4 of Hallow-vent is Another... 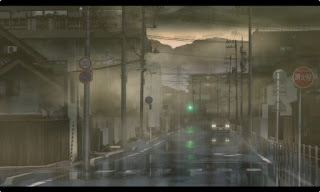 I have always been a huge fan of Japanese animation, ever since I was 12 (far too young) and watched the classic Yoshiaki Kawajiri Ninja Scroll. The animation style is interesting, and when done well can be an amazing experience. Sure, there is a ton of anime that is generic, or whose art style I can’t stomach long enough to get through, but there are still incredible works of art, like everything Miyazaki has ever done. I especially love horror anime, and so to break up all of the streamable options this year, I wanted to review a few horror anime series of which I have been trying to see for years. Today’s series is one that I first saw a trailer for in 2014 and have since scoured everywhere trying to find a copy. The glorious Susan Omand was kind enough to send me one from the UK as it isn’t available here in the states [You're welcome! - Ed], and so, after years of anticipation, today I am going to talk about Yuriko Ishii’s anime series Another.

This short, 12-episode series follows 9th grade student Koichi Sakakibara moving to a new middle school in Yomiyama, Japan. His father is traveling for work and Koichi is staying with his Aunt and his grandparents. He is hospitalized for his first month in Yomiyama due to a lung infection, and one day he is approached by three students from his new school: Izumi Akazawa, Tomohiko Kazami, and Yukari Sakuragi. The meeting is a strange one, full of ominous silences and things obviously left unsaid. There are questions asking Koichi is positive that he has never been in Yomiyama before.

Later that evening, as Koichi is up and moving around the hospital, he encounters another girl from his new school. He strikes up a conversation as this girl, named Mei Misaki, who is strangely heading to the basement, presumably to the morgue. She is strange and distant and there is a pervading sense of doom surrounding her. When Koichi is finally able to attend school, he notices that Mei is in his class but no one seems to acknowledge the girl except him. She tells Koichi that their class, Class 3, is close to death. 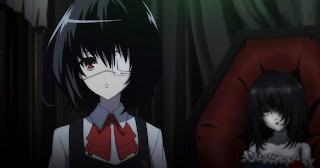 I don’t want to give away too much more about the plot. Just know that 26 years earlier, a male student with the surname of Yomiyama met a tragic end when his entire family was killed in a devastating house fire. The students of his class, Class 3 at Yomiyama Junior High, were so upset that they treated the empty desk as though he was still with them. They even left his seat open at graduation out of respect, and when the class photo was taken after graduation, the image of the deceased boy appeared. Because of this, a curse has developed. Every year that certain things are not adhered to, a member of Class 3, or one of their family members or teachers, is killed in a most brutal fashion. At least one new person dies each subsequent month.

The series focuses, at first, on the strange relationship between Mei and Koichi, but quickly evolves into something concerning the entire class. At first, I would classify this anime as horror, but as the series progresses, it takes on a more complex amalgam of horror and mystery. The story is stellar and I would recommend that anyone who can find a copy should pick it up and enjoy.

As I didn’t have a ton of time to really dive in completely, I watched the anime with English dubs and I must say that, unlike a lot of other animes, the English voice cast is stellar. Sound as a whole in this series is great. The effects of the environment and the objects moving or stabbing/slicing are spot on. Another strong point is the incredible music from Kow Otani. It is subtle and haunting and everything a series like this needs and deserves.

The artwork is wonderful and really lends itself to the subject matter. Not only are the characters not overly accentuated in the typical anime sense, they are also much more realistic in facial features. The death scenes, of which there are plenty, are so well done that I had to rewind and watch quite a few over again. The imagery presented is probably my favorite part of the series. There are random flashes of dolls and mannequins which break up the story and become jarring little jumps in the middle of an already tense series. They add another level to eeriness that permeates this show.

Do yourself a favor and enjoy this series for what it is: a horror-tinged mystery about a curse. The death scenes and gore are perfect for those classic, grisly horror fans. The mystery elements keep you on the edge of your seat and make you want to keep watching. When I started, I think I sat through 7 episodes without realizing; I just needed to see what would happen next. If you enjoy psychological horror with plenty of gore and blood, this series is a must.