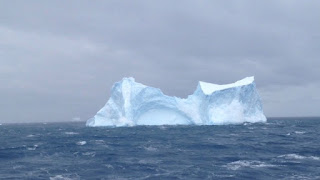 Exploring parts of Antarctica through literary sources and the history of the whaling industry to illuminate the void left behind after human exploitation.

The above synopsis sounds intriguing and is what drew me to Antarctic Traces in the first place and, whilst it states that the whaling industry was a big part of the film, I was in no way prepared for the demoralising, soul crushing hatred I would have for the human race when the films credits ran. It's not often I finish watching something with my broken heart so full of hatred to my fellow man but when Antarctic Traces was over, I just wanted to physically attack those in the whaling industry and treat them like the glorious creatures had been treated by them. And I would know how to because the acts of depraved butchery were described in painfully minute detail by narrator Elizabeth Anka Vajagic.

The film started with beautiful imagery of Antarctica and I was maybe expecting some poetic rhetoric over the top, something from Cook’s diaries or the like, something about exploration and human growth through knowledge. Wrong. From almost two minutes in I was made uncomfortable by the barbaric acts being described as the images of snow topped mountains and sleeping seals turned to rusty and broken whaling stations and unnerving percussion sounds that made me feel like I was there, part of the machinery of death. This is not a slight on Michaela Grill’s film at all, just a sad indictment of humanity. I found Grill’s film heart-breaking and barbaric and yet so vital I want the bloody thing shown in schools so the children understand how despicable grownups can be and that we can maybe raise a less cruel generation.

Antarctic Traces is stomach churning journey through a small part of human history that will leave you emotionally drained. I was thankful it was a relatively short film, clocking in around the half an hour mark, as I think any longer, and I may have to have stopped watching as my soul was being crushed. It is a film that should be a must see, an educational tool, but honestly it is so brutal on the senses that you need an iron heart to watch it. Get an iron heart. Watch Antarctic Traces. Get off your arses and make sure humanity is never this barbaric again.

Antarctic Traces is on at LFF on Sunday 6th October.